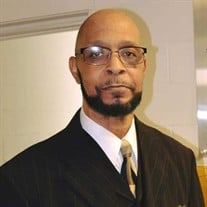 Tony Alan Wallace was born on February 28th, 1959 to the late Sarah Jane Wallace and the late George J. “Sonny” Crummel, Sr. He was baptized at an early age by his Grandfather, the late Reverend Joscephus “J.C.” Wallace, at Beulah Baptist Church, where he still attends. It is at Beulah Baptist Church of Steelton where he sang with the Youth Choir, Mass Choir, Men’s Choir, and ushered. His public education was with the Harrisburg School District where he attended Edison Junior High School, then elected to go to William Penn Vo-Tech School where he studied Basic Electricity. He furthered his education at the University of Maryland where he obtained an Associate’s Degree. He also attended the Theological Ecumenical Center of Harrisburg (TECH) for a period of time. He had attained several career positions ranging from the United States Army, where he served his country proudly for over a twenty-year period obtaining many awards and recognitions. He retired with the rank of Sergeant First Class (E-7). After the military, he furthered his career working for RRIC Engineering of Mechanicsburg, Bethany Village, Hershey Medical Center, as well as a private contractor performing basic home repairs, additions, and upgrades. He was raised in Samuel T. Daniels Lodge #109 of the M.W. Prince Hall Grand Lodge of the State of Maryland on October 4th, 1980. He was a member of Nimrod Consistory #9 of the Valley of Harrisburg. He served as Esteemed Loyal Knight at Unity Lodge #16 I.B.P.O Elks of the World. He was a member of the American Lodge and Veterans Affairs Counsel that is a non-profit organization that addresses the needs of all veterans. His greatest badge of honor was a Worshipful Master, where he was challenged to build on the foundation that has been previously established, to work closely with the Past Master of the Lodge, and to engage the craft with a sense of purpose. He realized his greatest love, the task he had been assigned was to teach and instruct the new generation, realizing his greatest gift was love and mercy. His love for God was known and felt by all. He was not ashamed to be called a Child of God. He loved his girls and grandchildren deeply. He enjoyed watching them grow into strong, God-fearing individuals. He enjoyed immensely seeing his daughter and grandsons minister at church. He would always express anytime he could spend with his girls and grandchildren was a time he always cherished. He was preceded in death by his father, Stephen “B.J.” Williams; and brothers, John Wallace, Melton Crummel, and Frank Simoncelli. He leaves to cherish his memories and love forever: his faithful and loyal daughters, Tajuanna Wallace-Franklin, Tyra N. House, Keyana Barbour-Maldonado; God-daughter, Alisha Flemister; his prized possession of 8 grandchildren, Ennis Tamani K. Mosley, Tamir J.C. Mosley, Destiny Barbour, Jalissa, Jayden, and Brandon Maldonado, Elijah and Ava Franklin; his siblings, Wayne Wallace, Martha Renee “Leesa,” Stephanie, Stephen Jr., Joseph Williams, George Jr., Karen, Anthony, Joy Elaine Crummel, Mark and Peggy Paumer; and a huge host of family and friends. It was the evening of November 29th, 2019 that he gained his wings and his mansion in the sky that he always talked about and desired to see! Submitted with our Everlasting Love, The Family

The family of Mr. Tony Alan Wallace created this Life Tributes page to make it easy to share your memories.