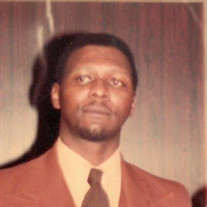 God saw the road was getting rough; the hills were hard to climb. He gently closed his loving eyes in whispered peace. Thomas Eugene Plummer Sr., son of the late Queen Esther (Palmer) Plummer and Rufus Wesley Plummer, was born Wednesday, March 31, 1948, in Harrisburg, PA. Thomas was educated in the Harrisburg School District. On August 19, 1978, he united in holy matrimony with Robin D. Penn. He fathered six children and worked tirelessly and diligently to provide for the needs of his family. After working for the City of Harrisburg, he provided services for the Penn Harris Cab Company. His whole life revolved around his family, and he extended love to all he met. He enjoyed family gatherings and outings as well as caring for others. Always the life-of-the-party, Thomas had a sarcastic sense of humor that lifted your spirit, and you could always catch his hands in the pickled-egg jar at family gatherings. He was a strong supporter of the Dallas Cowboys; enjoyed reading his Bible; traveling; and, most importantly, spending time with his grandchildren, family and friends. Thomas loved his church. His mother was a pioneer of the Seventh Day Adventist Faith. Later in life, Thomas was baptized and served as a Deacon at Hillside Seventh Day Adventist Church, Harrisburg. His faith was everlasting, and he was a strong believer prayer would carry you through each and every day. In Harrisburg, PA, on Thursday, December 9, 2021, Thomas transitioned from time to eternity joining his parents; brother, Elder Wesley A. Plummer; and sisters, Marlene D. Plummer and Karmel F. Plummer. Thomas leaves his love and cherished memories to his devoted wife, Robin Plummer; four sons, Terrence Tucker, Thomas Plummer Jr., Kedrick Plummer, Christian Plummer; his beloved daughter, Casey L. Plummer; one brother, Terrance C. Plummer; sixteen grandchildren and a host of nieces, nephews and friends. FAMILY AND FRIENDS ARE ENCOURAGED TO CLICK ON THE SHARE A MEMORY TAB TO POST VIDEOS, SHARE MEMORIES, CONDOLENCES, REFLECTIONS OR SIMPLY YOUR NAME. CLICK ON THE PHOTOS & VIDEOS ON-LINE STREAMING OF SERVICE TAB OR MEDIA TAB (MOBILE) AND TRIBUTE WEBCAST TO VIEW SERVICE.

God saw the road was getting rough; the hills were hard to climb. He gently closed his loving eyes in whispered peace. Thomas Eugene Plummer Sr., son of the late Queen... View Obituary & Service Information

The family of Thomas Eugene Plummer Sr. created this Life Tributes page to make it easy to share your memories.

God saw the road was getting rough; the hills were hard to climb....

Send flowers to the Plummer family.