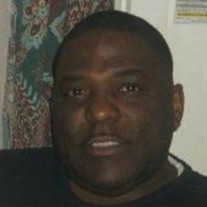 Thomas was born Wednesday, November 9, 1960, in Harrisburg, PA, son of the late Thomas A. Glasper Sr. and Patricia Barbee Glasper. At the age of fifty-seven, he departed this life on May 28, 2018. Tommy or “Glass,” (as he was known), was a graduate of Harrisburg High, Class of 1978; he pursued higher learning at Harrisburg Area Community College where he graduated in 2012 with an Associate’s Degree in Human Services. He served his country honorably in the United States Marine Corps. After he was discharged, Tommy spent years as a Lineman with PP & L, and more than 20 years as a truck driver. After receiving his degree, Tommy served the community, working at the YWCA and with Keystone Services as a counselor, and briefly for the Commonwealth of PA. Tommy was a member of From the Heart Ministries. In 1985, Stacie Burnett caught Tommy’s eye. He later told his wife that he knew the day they met that he would one day marry her. They spent wonderful years together as soulmates and best friends. On June 7th, they would have celebrated their 27th wedding anniversary. Tommy’s favorite thing to do was to spend time with his family, especially his wife Stacie and his grandchildren. When Tommy was younger, he enjoyed playing football for Harrisburg High Cougars and basketball at courts around the city. Tommy remained a spectator of golf, basketball, football; and avid fan of the Philadelphia Eagles. In his leisure time, Tommy enjoyed playing cards, dominos, golfing, bike riding, taking walks, going to the gun range, fishing, gardening, and watching his favorite TV shows (Jeopardy, Wheel of Fortune, the news, and Everybody Loves Raymond). Of all the things that he has done in life and all of the places that he has travelled to, nothing compared to the joy that Tommy received from raising his daughters and the pride and joy he had loving and doting on his grandchildren. He leaves to cherish many special memories his loving wife Stacie; five lovely daughters, Chekara Burnett, Sierra Glasper, Jessica Glasper, Tomanique Glasper and Jenise Glasper; four grandchildren, Kaelynn Bullock, Jayden Glasper, Raniyah Bullock and Caleb Glasper; two sisters, Carol Seay and Tamera Clemens (Howard); mother-in-law, Sylvia Green; sisters-in-law, Darlene Burnett and Jennifer Burnett; brothers-in-law, Craig Ezell and Jessie Burnett Jr. (Arecia); his favorite niece Sonya Gasper and devoted nephew Justin Hughes. In addition, Tommy leaves nephews, Julian Sr. and Paul Seay, Marques Hughes, Jesse III and Jakari Burnett, Christian Burnett, Cupid Giles, Carlos Quinones, Lil Craig, Nyhum and Regis Ezell; nieces, Raevette and Shepre Burnett, Cueva’ Giles, Junesha and Yonise Stewart, Felicia Ezell, six great-nieces, nine great-nephews and host of other relatives and friends. Submitted in Sorrow and Love, The Family

The family of Mr. Thomas A. Glasper Jr. created this Life Tributes page to make it easy to share your memories.

Send flowers to the Glasper family.