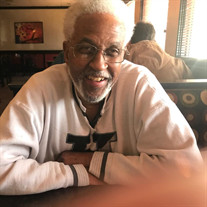 “The value of life is not in its duration, but in its donation.” ~~~~~~~~~~~~~~~~~~~~~~~~~~ Terry L. Thompson, son of the late Charles A. “Tiny” Thompson and the late Irene “Nip” Thompson, was born Wednesday, August 11, 1948, in Shippensburg, PA. A graduate of Shippensburg High School, Terry retired from the United States Postal Service and was employed as a Sexton at Capital Presbyterian Church, Harrisburg, PA. He was an avid Pittsburgh Steelers fan and enjoyed playing cards with his family as well. At the age of sixty-nine, while at UPMC Pinnacle West Shore Hospital Campus, Mechanicsburg, PA, on Friday, May 4, 2018, Terry transitioned from this life joining in eternal life his parents; his wife, Carolyn Thompson; his son, Anthony Thompson; brother, Charles “Rock” Thompson; and his sister, Ruth Thompson. Terry leaves to lovingly remember and celebrate his life one daughter, Camille Thompson of Chambersburg, PA; three brothers, George Thompson of Chambersburg, Donald Thompson and Walter Thompson, both of Shippensburg; as well as seven grandchildren, one anxiously awaited great-grandchild, other family members and friends. Submitted with our everlasting love, The Family

The family of Mr. Terry L. Thompson created this Life Tributes page to make it easy to share your memories.

“The value of life is not in its duration, but in its donation.”...