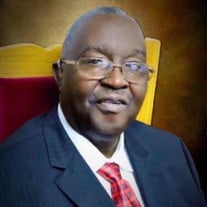 Superintendent Wilson Mosley, Jr. was born on October 1, 1946, to the late Deacon Wilson Mosley Sr., and Beatrice Tyler in Carlisle, Pennsylvania. He received his formal education in the Harrisburg School District, where he attended the William Penn High School. It was in the halls of William Penn where he met the love of his life, Hattie M. Hargrove. They married on October 13, 1965, and enjoyed 56 years of marriage until he transitioned to his eternal home on March 26, 2022. God added four children, a devoted nephew, 9 grandchildren, and three great-grandchildren to their union. From the days of his youth, the young man affectionately known as “Junie” possessed a deep and enduring love for his family and tremendous respect for the people of God. He also became an avid fan of the Washington Redskins, (now Washington Commanders) while growing up in Carlisle. Superintendent Mosley, a devoted husband, and father, ensured that he spent time with, supported, and nurtured his children. Whether he was cheering his sons on from the sidelines in his role as a football coach or attending the Harrisburg High School parades to watch his only daughter in the color guard, Pastor Mosley was there. His family never questioned his love. Pastor Mosley retired from the Shaffer Trucking company after serving 24 years as an owner-operator and later retired from the Rite Aid Corporation. He traveled extensively throughout the lower 48 states and was better than any GPS when giving directions. In addition, Superintendent Mosley had an eye for photography. He attended Harrisburg Area Community College to hone his photography skills and was rarely seen without his camera at family or church gatherings. As a Man of God, Superintendent Mosley demonstrated his servant leadership through the prayers he prayed, the wisdom he imparted, the time he sacrificed, and the life he lived. He was ordained to the ministry under the late Bishop Eddie Miller of Chicago, Illinois, in August of 1980 and served his ministerial apprenticeship under the late Elder Myer A. Carter. He received his formal training in the Congregational Churches of God in Christ, Inc., headquartered in Detroit, Michigan. He was ordained as an Elder of the church in August of 1983. During his tenure, Elder Mosley also served as the National Treasurer and the First Administrative Assistant to the Prelate, the late Bishop Hosea Evans, for over ten years. On March 4, 1990, Elder Mosley founded the XII Stones Congregational Church of God in Christ and was officially installed as the Pastor in 1990 by Bishop Evans. In 2013, Pastor Mosley joined the Pennsylvania Commonwealth Ecclesiastical Jurisdiction under the leadership of the late Bishop Benjamin J. Ravenel. He was appointed Superintendent of the Altoona District in 2014. An anointed Man of God, Pastor Mosley preached true Holiness, upheld the ancient landmarks, and was a faithful leader to his congregation and servant to Almighty God. Pastor Mosley was more than just a father in the Gospel for many. He was the closest thing that they had to a natural father. Superintendent Mosley fed God’s sheep, constantly reminding the people of God that even if the physical body should fail, the Saints of God are “in a win-win.” Pastor Mosley was preceded in death by his parents, granddaughter, Shardae, and brother, David Price. He leaves to cherish his memory, loving wife and First Lady, Mother Hattie Mosley; sons, William, Brian (Tina), Kevin Mosley, and daughter, Aretha McCrae (Anthony); brother, Linn Mosley (Cherise); 9 grandchildren, 3 great-grandchildren; a devoted nephew, Rynell Gantt (Tondelaya); and a host of nieces, nephews, in-laws and friends. FAMILY AND FRIENDS ARE ENCOURAGED TO CLICK ON THE SHARE A MEMORY TAB TO POST VIDEOS, SHARE MEMORIES, CONDOLENCES, REFLECTIONS OR SIMPLY YOUR NAME. CLICK ON THE PHOTOS & VIDEOS ON-LINE STREAMING OF SERVICE TAB OR MEDIA TAB (MOBILE) AND TRIBUTE WEBCAST TO VIEW SERVICE.

Superintendent Wilson Mosley, Jr. was born on October 1, 1946, to the late Deacon Wilson Mosley Sr., and Beatrice Tyler in Carlisle, Pennsylvania. He received his formal education in the Harrisburg School District, where he attended the William... View Obituary & Service Information

The family of Superintendent Wilson Mosley Jr. created this Life Tributes page to make it easy to share your memories.

Send flowers to the Mosley family.