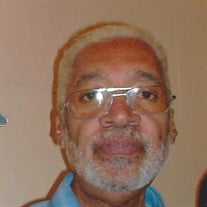 ~~~~~~~~~~~~~~~~~~~~~~~~~~~~~~~ “The value of a man is not measured by what he does for himself to make life easier, But by what he does for others to make their lives easier.” ~~~~~~~~~~~~~~~~~~~~~~~~~~ On Tuesday, May 29, 2018, Stanley Anderson transitioned quietly into eternal rest while at the Gardens of West Shore, Camp Hill, PA. Stanley was born Wednesday, May 9, 1951, in Harrisburg, PA, son of Gloria Broadus Anderson and the late Solomon Anderson. Along with his father, Stanley was also preceded in death by his paternal grandmother, Mary Anderson, and his maternal grandparents, Clyde and Dorothy Broadus. Stanley received the Lord Jesus Christ as his Savior and was baptized at an early age at First Zion Primitive Baptist Church, Edgemont, PA. He received his formal education in the Susquehanna Township School District where he graduated from Susquehanna Township High School, Class of 1969. Thereafter, he attended Shippensburg State University where he met his lovely wife Jeannette and acquired many friendships. Stanley worked for a short time at PPL and Hershey Foods before going to Bell Telephone of PA which eventually changed to Verizon. He retired from Verizon with thirty years of service. He loved sports, especially football and basketball. His favorite team was the Pittsburgh Steelers. He was a member of the Harrisburg Sportsman Football Club of PA. He loved sitting in his recliner watching “Matlock,” “Murder She Wrote,” and “Perry Mason.” Stanley also loved to cook, and if anyone ate at the Anderson’s home, they knew they were in for a treat. Foremost, he enjoyed spending time with his children and grandchildren, especially during the holidays. He was a member of the Valentine Get-A-Way Weekend for over twelve years coming together with other couples to enjoy the Valentine Weekend. Everyone enjoyed Stanley’s sense of humor. Stanley leaves to celebrate his life, his loving and devoted wife of forty-five years, Jeannette Anderson; his mother, Gloria Anderson; two loving sons, Brian E. Anderson (wife Jackie) and Aaron L. Anderson (girlfriend Lisa); three sisters, Karen Simpson (Hubie), Patrice Beasley (Joseph) and Tina Frye (Robert); and one brother, Stacey Anderson. Stanley’s memory will also be lovingly cherished by eight grandchildren, Bre`an, Aarion, Taje’, Zakiya, Tatiana, Brian Jr., Tamiia, Elijah; six great-grandchildren; his best friend, Larry Kelly with whom he enjoyed a special friendship for over thirty-five years; two goddaughters, Danielle Harrigan and Patrisha Hunt; mother-in-law, Emma Brazzle; uncle, Alfonso Broadus (Kathy); sister-in-law, Genevieve White (Milford); and a host of other family members and friends who loved him dearly. Lovingly Submitted by Stanley’s Family

The family of Mr. Stanley Anderson created this Life Tributes page to make it easy to share your memories.

Send flowers to the Anderson family.