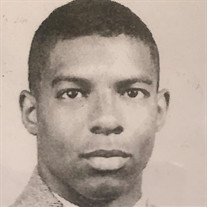 Spencer Irvin Roberts, born Friday, April 18, 1947, in Harrisburg, PA, son of William H. Sr. and Marzetta Roberts, transitioned into eternity Thursday, August 22, 2019, at his home in Oberlin, PA, surrounded by family. Spencer was a graduate of Central Dauphin High School, Class of 1965. After high school, he attended Thaddeus Stevens Technical School and began his career as a resilient Floor Installer. The majority of Spencer’s carpentry career was spent at Slough Flooring where he made several lifelong friends. Spencer was a member of the Carpenters Union through various local offices as well as a good standing member of the Greater Pennsylvania Regional Council of Carpenters. In August of 1968, Spencer married his childhood sweetheart, Sandy Brookins. From that 20-year union came his one and only daughter Shana who was blessed to care for and spend every moment with him during his last days. Spencer attended St. Paul A.M.E Church, Oberlin, under the pastorate of Reverend Rosemary “Mim” Roberts Harvey who he affectionately called Rose. He served in this family church as needed in various capacities. Spencer enjoyed spending time with his family, especially milestone moments with his grandchildren, and sitting around with his brothers, cousins and Uncle Marlin. He was a “Mama’s Boy” up until he entered eternity! He enjoyed hosting events at his home, going to local markets like Roots and Broad Street, fishing, watching NASCAR races, cheering on LSU and hanging with his second family at Gilligan’s. Additionally, Spencer was the Cofounder and CEO of “The Liars Club” which was held at his home every Tuesday evening, year-round. In retirement, he “worked” at Giant Food Stores as the head of the “Social Department.” Spencer was preceded in death by his father and mentor, William H. Roberts Sr., and his brother, Larry E. Roberts. He is survived by his lovely mother, Marzetta Roberts who planted a seed in him that he would need to draw strength from in the end; his daughter, Shana Abreu; son-in-law, Micheal Abreu Sr.; grandchildren, Morgan, Angele’, Micheal Jr., Kylea and Tamia; and a great-grandson, Jaiven. Spencer is also survived by three brothers, William H. Jr., Charlie A. (Pat), Michael J. (Pamela); one aunt, Jeanette Perry of Los Angeles, CA, whom he was able to spend time with before his transition; one uncle, Marlin Branch Sr. (Judy) of Newport, PA; as well as a host of nieces, nephews, cousins and friends. Spencer, affectionately known by many as Dad, Pop-Pop, Hummy, Spence, Little Pete and Pooh, was a macho man with the heart of a teddy bear. He was truly loved by many. He will desperately be missed, but his memories and legacies will live on; so it’s not Goodbye, it’s See You Soon! Lovingly Submitted, The Family

The family of Mr. Spencer Irvin Roberts created this Life Tributes page to make it easy to share your memories.

Send flowers to the Roberts family.