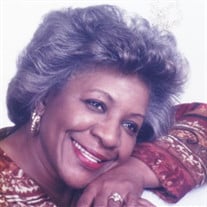 Shirley Ann Wallace McKenion, daughter of the late Richard Wallace and Marie Johnson Wallace, a long-time resident of the Tampa Bay, FL, area, quietly departed on Monday, January 6th, 2020. Shirley was born on October 30th, 1942, in Harrisburg, PA, where she attended Steelton High School. In 1959 she was blessed with a son, Jamie R. Wallace, and during the early 1960’s Shirley met and later married the love of her life, Lawrence “Larry” McKenion. Their loving union lasted 48 years until his passing in 2013. During her professional career and union with Larry, she lived in many places, including Mechanicsburg, Pennsylvania, Denver, Colorado, Dallas, Texas, Kansas City, Missouri, and Tampa, Florida where they eventually made their permanent home. At a young age, she professed her faith, by becoming a member of Beulah Baptist Church in Steelton, PA and later at True Faith Inspirational Baptist Church, Tampa, FL. During her 25 year membership, she served on many committees, was a member of the choir, and became a trustee of the church. To know Shirley was to know love. She lived to the fullest every day, which included following her passions. She was passionate about football, travel, and most of all her family. To Shirley, family included not just biological relationships, but also lifelong friends and colleagues. Shirley has been called home to be with her husband, Larry, her parents, her brother, Willie James “Chuck” Wallace, and her two sisters, Rose Marie Wallace, and Georgianne Manning. Shirley leaves to mourn her transition, her son, Jamie Wallace; her granddaughter, Jordan McMican (Jairo), Raleigh, NC; her three sisters, Bertha Johnson, Tampa, FL, Louise Cook, Chester, SC, Rachel Powell (Gary), Harrisburg, PA; and her two brothers, Jerry Wallace (Dale), Harrisburg, PA, and Dennis Wallace, Scranton, PA; her great-grandsons, Zaire McMican and Braxton McMican; cousins, nieces, nephews, and a host of longtime friends from several states. In lieu of flowers, donations can be made to the American Lung Association or the American Cancer Society.

The family of Mrs. Shirley Ann Wallace McKenion created this Life Tributes page to make it easy to share your memories.

Send flowers to the McKenion family.