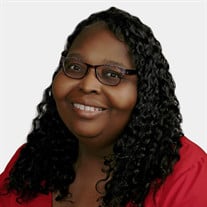 Sherry Darlene Ayler, 56, passed away Wednesday, December 11, 2019, in Harrisburg, PA. Sherry was born August 2, 1963, in Mobile, Alabama to Mary T. Ayler and the late Herman L. Ayler. Sherry, along with her three siblings, Vanessa, Riccardo, and Demetrius were raised in Harrisburg, PA. She attended William Penn Vocational-Technical School, graduating in 1981. Although she made her home in Pennsylvania, she always kept a special place in her heart for Mobile, Alabama and unequivocally rolled with her favorite college football team the Alabama Crimson Tide. Sherry was an avid reader, classic movie buff, accomplished baker and creative southern cook. She was known for her decadent German Chocolate Cake. Every summer she enjoyed breaking out her charcoal grill, where she painstakingly tended to the grilling meats no matter how hot the temperature that day. Her specialty was her mother’s Southern BBQ recipe. The aroma from her grill was legendary and permeated the whole neighborhood. That BBQ could make a grown man cry. Sherry also loved to travel the world with her family and friends and did it the only way she knew how, First Class. She had a talent for recounting her adventures that left a person laughing long after the hilarious stories ended. Her family was her heart and she always spoke of how proud she was of her mother, Mary. The feeling was mutual. Sherry’s family took great pride in her and supported her with the pursuit of her dream of working in medicine, to become a Registered Nurse in 1994. She found her niche specializing in Critical Care Nursing. In the course of her career, she worked in various hospitals throughout Central Pennsylvania and traveled the east coast as a critical care nurse working in cardiovascular and intensive care units. In 2007, Sherry suffered from a catastrophic stroke. Determined to recover from the traumatic brain injury, Sherry dedicated herself to months of grueling physical, occupational, and speech rehabilitation. Her relentless tenacity to recover was matched only by her will and desire to successfully return to her career as a medical/surgical intensive care nurse at Penn State Hershey Medical Center which she did in 2008. She never stopped improving and amazed even herself years later by returning to school to further her post-secondary nursing education. Sherry received a Bachelor of Science Degree and a Master of Science Degree in nursing from Millersville University. Sherry did not stop there; she took her career goals one step further by earning a Post-Master’s Degree Certification as a Family Nurse Practitioner in 2018. After more than 24 years as a Registered Nurse, she left bedside nursing and began her new career in 2019 as a Nurse Practitioner with Pulmonary & Critical Care Medicine Associates. Sherry was extremely passionate about her work. She faced new challenges each day which she found to be both exciting and rewarding. Sherry was beloved and will be greatly missed. She is survived by her loving mother, Mary T. Ayler of Harrisburg, PA; two brothers, Riccardo Ayler (Antonia) of Oberlin, PA and Demetrius Ayler (Ursula Culpepper) of Harrisburg, PA; four nieces, Crystal M. Ayler, Demetria Q. Ayler, Briana M. Ayler, and Ursula V. Ayler; three nephews, Jerome A. Ayler, Terryl J. Ayler, and Elijah M. Ayler; as well as a host of extended family and friends. Sherry was preceded in death by her father, Herman L. Ayler; sister, Vanessa Y. Ayler; and nephew, Phillip J. Ayler. During her time here, Sherry touched the lives of her many friends, colleagues, and patients. May each memory bring a smile and shine brightly in the hearts of those who cherished her. There will be no public services, the family asks for this time to privately mourn their loss.

The family of Ms. Sherry Darlene Ayler, C.R.N.P. created this Life Tributes page to make it easy to share your memories.

Send flowers to the Ayler, family.