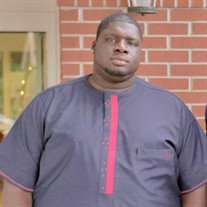 Samuel Onuora Onyeaka, son of Samuel Onyeaka Sr. and Ifeyinwa (Okeke) Onyeaka, was born Wednesday, August 27, 1986, in Huntsville, AL. Samuel attended high school at Central Dauphin East, Harrisburg, PA, junior college at Valley Forge Military Academy, Philadelphia, PA, and earned a full scholarship to Grambling State University where he received his Bachelor of Science Degree in Civil Engineering. Samuel was a member of the football team in each learning institution he attended. Some of his special interests include computer technology, engineering technology and gaming. Samuel was a member of the Anglican Church of the Pentecost, and he was employed by Lowe’s, Harrisburg, PA. Samuel was a loving and charismatic individual that left a lasting impression on everyone he crossed paths with. With such an infectious smile and upbeat spirit, it would be hard not to smile along with him. Even from an early age Sam was the life of the party and made sure the morale in the room was always positive and worthwhile. On Saturday, November 27, 2021, at thirty-five years of age, Samuel departed this life. He leaves to mourn and fondly remember his life: his parents, Samuel Sr. and Ifeyinwa “Cathy” Onyeaka of Harrisburg, PA; three brothers, Benjamin Nweze of Harrisburg, PA, Kenneth Chukwuemeka Onyeaka and Kevin Chigozie Onyeaka, both of Los Angeles, CA; sister-in-law, Lorraine Nweze, and nephew, Benjamin David Nweze, both of Harrisburg, PA; an uncle, Lawrence Nnebe of Douglasville, GA; cousin, Veronica Ifeoma Dike of Valrico, FL; other family members and friends. FAMILY AND FRIENDS ARE ENCOURAGED TO CLICK ON THE SHARE A MEMORY TAB TO POST VIDEOS, SHARE MEMORIES, CONDOLENCES, REFLECTIONS OR SIMPLY YOUR NAME.

The family of Samuel Onuora Onyeaka Jr. created this Life Tributes page to make it easy to share your memories.

Send flowers to the Onyeaka family.