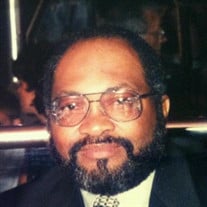 Samuel M. Hunter, son of the late Richard and Elizabeth Roach Hunter, was born Friday, May 3, 1946, in Sumter, South Carolina. Moving with his family from South Carolina to Pennsylvania in 1951, he attended the Steelton school district graduating from Steelton High School in 1966. After graduating from high school, he joined the United States Army. His only tour of duty was in Baumholder, Germany. He was honorably discharged in 1970 as a Sergeant. Sammy, as he was affectionately called, united with the Beulah Baptist Church in Steelton, Pennsylvania at an early age. He was a faithful member of the church having served with the Van Ministry. He attended Universal Heavy Construction School, Harrisburg Campus, where he received his Certificate of Completion. After receiving his certificate in 1972, he was certified as an Operating Engineer with International Union of Operating Engineers Local Union #542. Having worked as an Operating Engineer, he retired with 20 years of service. He later worked as a Sign Technician with the Pennsylvania Department of Transportation and retired with 13 years of service. On July 13, 1968, he married Martha Curtis, and they shared 49 years of marital bliss. From this union, two loving daughters were born, Tammy and Nyette. Sammy had a great interest in politics and history. If you ever had a question about a political matter or history event, you could ask Sammy and he would educate you. He was a great debater and often times could be found watching political debates whether local, state, or national events. He also loved traveling with his family and would often times make the arrangements. When Sammy wasn’t working or traveling, he loved watching MSNBC and many western shows – “Gunsmoke” was his favorite show. He was also a sports enthusiast watching football and golf. Seattle Seahawks was his favorite team. Along with his parents, he was predeceased by one son, Kevin Hunter, and one sister, Esther White. He departed this earthly life on Sunday, September 24, 2017, with his loving and devoted family by his side. He leaves to cherish his memory, his devoted and loving wife of 49 years, Martha; two daughters, Tammy Daniels of Pensacola, Florida and Nyette Hunter of Harrisburg; one grandson, Ja’ohn McArthur-Hunter of Harrisburg; great-niece raised as a granddaughter, Iris Rodriguez of Harrisburg; sisters, Felita Cash (William) of Hershey, Pennsylvania and Gina Martin (Stanley) of Steelton; brothers, Marion Roach, Roosevelt Daniels (Marie), Richard Daniels (Betty), Darwin Daniels (Andrienne), Gabriel Daniels (Alisa), all of Steelton, brother and God-son, Christopher Daniels (Monica) of Hartford, Connecticut; sisters-in-law, Julia Griffin, Elveta Birt, Mary German, Naomi Bell, all of New York, Louise Crosson of Harrisburg; brothers-in-law, Nathaniel Curtis (Norma) of Albany, New York, John Curtis of Beaufort, South Carolina, Harry Curtis (Debbie) of Sumter, South Carolina, Ezekiel Curtis (Mary) of Harrisburg; two aunts, Wilhelmenia Keith of Steelton; Harriet White of Baltimore, Maryland; one uncle, Harvey Monroe of Harrisburg; four adopted grandsons in love, Ashoka Jangdhari, Kani Singleton, Austin Anderson and Lorren Brown; God-sons, Vernon Roach, Reginald Roach, Sr., Sean Spencer, and William Daniels; step-sister, Marsha Wright (Jeffrey); step-brother, Howard Murray (Lisa); special friend from Fourth Street (Steelton), Valerie E. Spencer; numerous nieces, nephews, cousins, other relatives and friends. Lovingly Submitted ~ The Family

Samuel M. Hunter, son of the late Richard and Elizabeth Roach Hunter, was born Friday, May 3, 1946, in Sumter, South Carolina. Moving with his family from South Carolina to Pennsylvania in 1951, he attended the Steelton school district graduating... View Obituary & Service Information

The family of Mr. Samuel M. Hunter created this Life Tributes page to make it easy to share your memories.

Send flowers to the Hunter family.