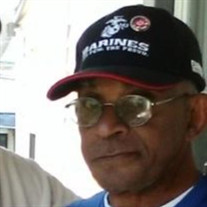 "To Know Him is To Love Him" Ronnie Eugene Brooks, known as “Goldie” by family and friends, was born Saturday, May 16, 1953, in Harrisburg, PA, son of the late Howard J. Brooks Sr. and the late Albertine “Tina” Young-Brooks. Educated in the Harrisburg School District, Ronnie served in the U. S. Marine Corps until diagnosed with Myasthenia Gravis. He was employed as a Teacher’s Aide for many years and was united in Christian fellowship with the Mount Calvary Church of God in Christ. Ronnie was very devoted to his family even while battling Myasthenia Gravis, cancer and attending his dialysis treatments. This great man of integrity was also a man of love. His love impacted his family and all those who knew him. Ronnie enjoyed playing cards, watching football, listening to music and, especially, spending time with his brothers. When leaving his sisters, Ronnie’s “goodbyes” were throwing up the peace sign close to his heart. On Tuesday, August 4, 2020, God dispatched his angels to escort Ronnie Eugene Brooks from his home in Steelton, PA, into life eternal with his parents; three brothers, Howard Brooks Jr., Darrell Greenslade, Conrad Greenslade; and one sister, Eleanor B. Stevenson. Ronnie leaves to cherish many irreplaceable memories his two brothers, Morris Brooks of Harrisburg, PA, Ralph Brooks of Middletown, PA; three sisters, Emma Brooks of Middletown, Jeannie Brooks of Harrisburg, and Debbie Greenslade of York, PA; twenty-nine nieces and nephews, forty-one great-nieces and nephews, and fifty-eight great-great-nieces and nephews. Ronnie will be truly missed by a host of cousins, other family members and friends who are all blessed to have shared a portion of his journey. FAMILY AND FRIENDS ARE ENCOURAGED TO CLICK ON THE SHARE A MEMORY TAB TO POST VIDEOS, SHARE MEMORIES, CONDOLENCES, REFLECTIONS OR SIMPLY YOUR NAME ALLOWING THE FAMILY TO KNOW YOU ARE THINKING OF THEM. ON-LINE STREAMING OF SERVICE. CLICK ON THE PHOTOS & VIDEOS TAB OR MEDIA TAB (MOBILE) AND TRIBUTE WEBCAST TO VIEW.

The family of Ronnie Eugene "Goldie" Brooks created this Life Tributes page to make it easy to share your memories.

&quot;To Know Him is To Love Him&quot;