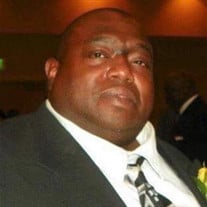 Rodney O'Neal Washington was born November 30, 1966. His father Benjamin and Shirley (Ford) Washington were beyond excited with the arrival of their 1st child From day one Rodney was a precocious child. He enjoyed playing football for South York youth football league and forming lasting friendships with the CA crew, Buick Crew, and the Class of 84. In addition to his rap skills, Rodney was a standout football player for the mighty York High Bearcats. They say when 75 hit you everyone heard the "BOOM". Upon graduating from William Penn Senior High School (York High) in 1984, he attended Thaddeus Stevens College in Lancaster, PA. and later earn credentials as Heavy Equipment Operator. Rodney used his skills and talents to help the family business, Washington and Dowling Contractors continue to flourish. His legacy as Coach is unparalleled and provided a new platform for him to talk trash, mentor young men, and help scholar athletes acquire their goals. He served as a father figure and coach for several talented teams: including but not limited to the York Raiders AAU, PA Elite, Spooky Nook Raiders AAU, and Boys Club of York. Rodney was such an inspiration and always made time for everyone. He enjoyed posting uplifting messages and cheering on his favorite team, Pittsburgh Steelers. At fifty-three years of age, Rodney transitioned from this life into eternal life on Tuesday, March 24, 2020. Along with his parents, his legacy and love will be missed by his maternal grandmother, Lena Mae Sherman, Bamberg, SC; his beloved children: Ashley (Tyree) Ruffin, Landsdale, PA, Barton Ruffin, Tequila Ruffin, and K’ron Washington; Yesaya Cisse, whom he helped raised as his son; grandchildren: Khaliq, Bryson, Tahjai, Te’Quari, Triniti, and Jordyn; siblings: Sherry Roland-Washington (Steve), Crissy Washington, and Stacy Washington (Ti’Waun); niece Nylah; nephews: Steven, Jeremiah, and Asher; and a host of Uncles, Aunts, Cousins, and Friends. Preceding him in his transition were his paternal grandparents: Nathaniel and Olive Washington and his maternal grandfather, James Ford, Sr. Although, weeping may endure for a night, we know joy will come in the morning. We find comfort in knowing our ancestors welcomed you as you crossed the river to reside in your new home. From God we come and to God we must return. Ase' Ase' and Shalom. May God continue to grant you grace on the next phase of your journey. VIEWING, PRIVATE; SERVICE, IMMEDIATE FAMILY ONLY NO PUBLIC SERVICE Family and friends are encouraged to click on the Share a Memory Tab to post videos, share memories, condolences, reflections or simply your name allowing the family of Mr. Rodney O`Neal Washington know you are thinking of them during this time of bereavement

Rodney O'Neal Washington was born November 30, 1966. His father Benjamin and Shirley (Ford) Washington were beyond excited with the arrival of their 1st child From day one Rodney was a precocious child. He enjoyed playing football for South... View Obituary & Service Information

The family of Mr. Rodney O`Neal Washington created this Life Tributes page to make it easy to share your memories.

Send flowers to the Washington family.