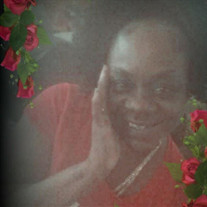 Robyn was born Sunday, January 23, 1966, in Orange, New Jersey, daughter of the late Robert Hairston and the late Yolanda Hendricks Tucker. Robyn graduated from Orange High School where she was well-known by her childhood friends as being one of the best track runners in the State running relay as the anchor and first leg for the 400 relay. Robyn resided in East Orange, and Newark, New Jersey, during some of her young adult years before in the late 1980’s relocating to Jersey City, New Jersey, where she met her husband Henry Sabb and they raised their children. In 2006, the family moved to Harrisburg, Pennsylvania. Robyn and Henry made Harrisburg their home and shared twenty-five years together until Henry’s passing in 2016. Robyn was united in Christian fellowship with Victory Outreach Fellowship and employed by the Commonwealth of PA, Department of Transportation. Robyn was nicknamed “Ooga Bay” by her siblings and “Momma Robyn” by many neighborhood friends. Her love of cooking was only surpassed by her love of family. Not only did she love to cook and was known by her family as the “greatest cook,” she was an avid Cowboys and Lakers fan as well. Robyn was one of the most courageous women you could ever meet. She lived life to its fullest never allowing any obstacles to stand in her way. She was very family oriented, and one could not ask for anymore as a parent, partner, sibling and friend. Robyn stayed surrounded by the love of family, friends and, most importantly, her grandchildren who brought her so much joy during her lifetime. In Harrisburg, Pennsylvania, at fifty-two years of age, on Friday, September 7, 2018, Robyn transitioned from this life joining in eternal life her parents, husband and grandson, Kaquan L. Hendricks Jr. Her life and memory will forever be cherished in the hearts of her children, Kaquan Hendricks, Kynesia Hendricks, Kyia Jones and her husband Eric and Mahdi Hendricks; her siblings, Damon Hendricks, Elaine Johnson, Gerald Johnson, Rodney Johnson and Eddie Johnson; her grandchildren, Khalil Hendricks, Khaliya A. Hendricks, Dyzire Delancy, Ya`mere Hendricks, Rahmir Hendricks, Diamond Hendricks, Legacy Hendricks, Dream Hendricks, Kamryn Jones and Kouture Hendricks; other family members and friends. Lovingly Submitted, The Family of Robyn Michelle Hendricks

Robyn was born Sunday, January 23, 1966, in Orange, New Jersey, daughter of the late Robert Hairston and the late Yolanda Hendricks Tucker. Robyn graduated from Orange High School where she was well-known by her childhood friends as being one... View Obituary & Service Information

The family of Mrs. Robyn Michelle Hendricks created this Life Tributes page to make it easy to share your memories.

Send flowers to the Hendricks family.