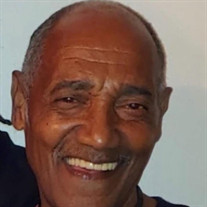 Robert Cartnail, affectionately known as “Johnny,” was born on Thursday, April 5, 1951, to the late Earl Cartnail Sr. and Margaret (Fisher) Cartnail in Frederick, Maryland. Johnny received his formal education in the Frederick, Maryland, school systems, and in later years, he received his GED. Johnny retired from the City of Harrisburg, Public Works, where he worked for over twenty years. For years after his retirement, he worked for Morris Laundromation and North 17th Street Church of God in Harrisburg. Johnny joined Q J Services LLC in 2003, where he was currently employed. He was an incredibly hard worker. Throughout his working career, he formed many successful relationships and left a lasting impact on everyone he worked with. Anyone who knew Johnny was touched by his kindness, humor, and mild temperament. He always made a way out of no way, always willing to help others. His family meant more to him than anything else in the world. He deeply loved his family and was relentlessly proud of his seven children. He would share the love he had for his children with anyone he came across. He was forever saying “I LOVE ALL MY KIDS!” - #DADSSUPER7 Johnny was musically inclined, played the drums, and was in a band now and then throughout his young adult life. He also enjoyed watching and sharing movies with family and friends. On Sunday, March 6, 2022, at 3:52 p.m., while at his home in Harrisburg, PA, Robert “Johnny” Cartnail at seventy years of age peacefully passed away with his children lovingly by his side. He battled the disease with the most amazing grace, bravery, and strength. He lived his final days on this earth with positivity and determination not to let the disease keep his spirits down. In addition to his parents, he was preceded in death by his sisters, Mary Leaks, Diane Longmire and Betty Weed; and his brother, Earl Cartnail. Johnny leaves to celebrate his life and cherish many precious memories: his four beautiful daughters, twins, Tracy Weaver (Rob) of Steelton, PA and Stacy Hawthorne (Mark) of Harrisburg, PA, Karen Robinson of Harrisburg, PA, Janell Chase of Harrisburg, PA; his three handsome sons, Jason Little of Lilburn, GA, Justin Little of Lancaster, PA, and Robert Cartnail Jr. of Mechanicsburg, PA; one brother, Gordon Cartnail of Frederick, MD; his grandchildren, Alexandria and Aigner Edwards of Steelton, PA, Tramayne and Jaylen Hawthorne, Dayasia Drayton, all of Harrisburg, PA, Ariel Anderson of Harrisburg, PA, Jaya and Jayden Little of Lilburn, GA, Arianna and Jayla Chase, Jarell Jackson Jr., all of Harrisburg, PA, Makayla and Aniyah Little of Lancaster, PA, Londyn and Rome Cartnail of Harrisburg, PA; his great grandchildren, Zander Strain of Steelton, PA, Traycen Hawthorne of Harrisburg, PA, and A’sir Anderson of Harrisburg, PA; and a host of nieces, nephews, cousins and friends. We will all miss him more than words can say! Submitted in Faith, Hope and Love by the Family FAMILY AND FRIENDS ARE ENCOURAGED TO CLICK ON THE SHARE A MEMORY TAB TO POST VIDEOS, SHARE MEMORIES, CONDOLENCES, REFLECTIONS OR SIMPLY YOUR NAME. CLICK ON THE PHOTOS & VIDEOS ON-LINE STREAMING OF SERVICE TAB OR MEDIA TAB (MOBILE) AND TRIBUTE WEBCAST TO VIEW SERVICE.

The family of Robert "Johnny" Cartnail created this Life Tributes page to make it easy to share your memories.

Robert Cartnail, affectionately known as “Johnny,” was born on...

Send flowers to the Cartnail family.