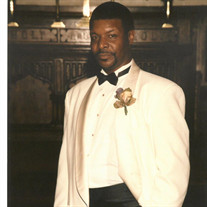 Richard Eugene Washington, son of the late Vivian Arlene Washington and the late Willie Joe Darien, was born Monday, January 3, 1955, in Harrisburg, PA. Affectionately known as “Mr1derful,” Richard was educated in the Harrisburg School System where he attended Hamilton Elementary School, Camp Curtin Junior High School and in 1973 graduated from the former William Penn High School. It was during junior high school that Richard acquired a love of music, especially jazz. He played in the marching bands and the school orchestra. He was a member of the “Imperial Funk Revue” aka “Diamond Funk.” Richard joined the United States Navy in 1974 and made several Mediterranean Cruises. Upon becoming a Gunner’s Mate Third-Class Petty Officer on the Destroyer Escort U.S.S. McCloy, he left military service and returned to civilian life in 1977. Richard began his civilian career at the New Cumberland Army Depot until 1978. In 1979, after a brief period of unemployment, he accepted employment with the Commonwealth of Pennsylvania, Office of the Visually Handicapped. He was later transferred to the Department of Health and Welfare. Upon termination of his position, Richard used his G.I. Bill to attend Harrisburg Area Community College during the spring semester of 1980. In January of 1981, he was offered a job at Ships Parts Control Center, Mechanicsburg, PA, working in several positions prior to being certified as a Pest Control Operator. He retired from Navy Ships Parts Control Center on June 2, 2012. In July, 2000, Richard married Lynette Elizabeth Brown and together they raised three children, Richard, Patrice and Antoine. In 2008, Richard returned to the church of his youth, Camp Curtin Memorial Mitchell United Methodist Church formerly known as Mitchell Memorial Methodist Church under the pastorate of Reverend Andrew T. Bradley. Among his many civic, community and fraternal accomplishments were recipient of a Tribute from the Army War College Foundation for his generous support; awardee of an orange belt in Kung Fu; and he gave of his time as a basketball referee in the community. Active on the Board of Directors of American Legion, Post 733, he eventually transferred to American Legion, Post 420, where he held the offices of Sergeant at Arms, Senior Vice Commander and Post Adjutant. In 2002, Richard was introduced to Elkdom. He joined the Past Exalted Ruler Council #6 of Central Pennsylvania. He held the positions of Treasurer, Financial Secretary and received his Past State President Honors in May of 2008. In Harrisburg, PA, on Saturday, March 19, 2022, at sixty-seven years of age, Richard transitioned from time to eternity joining in eternal life his parents and his brother, Jeffrey Howard Washington. He leaves to honor and cherish his legacy his wife, Lynette E. (Brown) Washington; sons, Richard Wright, Antoine Curry; daughter, Patrice Curry; daughter-in-law, Tasha Wright; his siblings, Salandra Darien, Willie J. “Gene” Darien, Kerry R. Darien, Mario “Tony” Bates, Bryon Zamboni, Raymond Washington, David Washington, Dolores Washington; seven grandchildren, two godchildren, other family members and friends. FAMILY AND FRIENDS ARE ENCOURAGED TO CLICK ON THE SHARE A MEMORY TAB TO POST VIDEOS, SHARE MEMORIES, CONDOLENCES, REFLECTIONS OR SIMPLY YOUR NAME.

The family of Richard Eugene "Mr1derful" Washington created this Life Tributes page to make it easy to share your memories.

Send flowers to the Washington family.