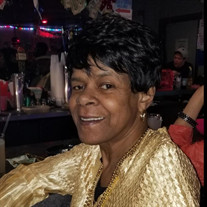 Paula Yvonne Bowman Davis was born on May 30, 1949 to Dolores Bowman Farner of Harrisburg, PA, (deceased) and Elisha McDonald of Wilmington, NC. Paula graduated from John Harris High School, Class of 1968. For over fifty years, Paula was a dedicated and committed employee of Harrisburg Hospital, now UPMC Pinnacle Harrisburg where she retired in 2019. Paula was a member of the Allison Hill Club where she enjoyed the fellowship and enjoyable time spent with her friends. Leisurely, she enjoyed quiet time watching TV (especially Westerns) in her favorite chair while most of the time falling asleep. She loved spending time with family and friends during special gatherings. Her time with her children and grandchildren were invaluable. As those moments were simply time and space shared with true and genuine conversations. A tradition started at her little sister Poochie’s house, later turned into “Girls Night” at her own home. She looked forward to those Tuesday and Wednesday evenings; those were the moments when “the girls,” Star, Armeka, Tracy and Vicky Daniels would gather at her home to watch some of their favorite TV series to include: “If Loving You Is Wrong,” “The Have and The Have Nots” and “Empire.” Paula had a love for tea sets. Throughout her home were her beautiful displays of tea sets. If you knew Paula, you knew that her favorite article of clothing was hats. There were rare moments that you saw her without one. With the exception of cooking, there weren’t many things Paula did not enjoy. It was not a secret; Paula did not like to cook! Paula departed this life and received her eternal wings on Saturday, June 6, 2020 surrounded by loving family and friends. She was preceded in death by her mother, Dolores Bowman Farner; stepfather, Donald “Dutch” Farner; her maternal grandmother, Stella Mae Bowman Hardin; grandfather, John Bowman; and her aunt, Janet Bowman Polk. Paula leaves to cherish her life, her loving daughter, Stella “Star” Bowman (Mel); son, Leroy “Lee” Davis; father, Elisha McDonald, all of Harrisburg, PA; one brother, Clifton Bowman of Mechanicsburg, PA; three sisters, Victoria Bowman Clark (Gene), Janet Bowman Hamilton (Ernest), Michelle “Poochie” Singleton (Brian), all of Harrisburg, PA; two grandsons, Edward “Duke” Bowman, Kedric “Puddy” Williams; two granddaughters, Aleesha Steptoe, Melaysia Walker; one great-grandson, Jaheim; two cousins (raised like sisters), Sandra Spriggs and Dolores Harvey; as well as a host of nephews, nieces, cousins and friends. Submitted with a Heart of Love and Pain, The Family Family and friends are encouraged to click on the Share a Memory Tab to post videos, share memories, condolences, reflections or simply your name allowing the Davis Family know you are thinking of them. On-line streaming of service; click on the photos & videos or Media (Mobile) tab to view.

The family of Paula Yvonne Bowman Davis created this Life Tributes page to make it easy to share your memories.