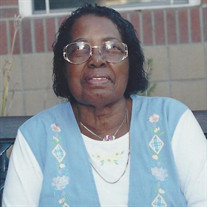 Orqulla Brown, also known as Jessie Mae Brown, was born Wednesday, November 25, 1925, in Wheelock, TX, daughter of the late Walter Harris and Savannah Taylor. Ms. Jessie accepted Christ as her personal Savior and was a devoted, dedicated homemaker and mother. She resided in Denver, Colorado, until when she became very ill, her daughter Shirley moved her to Harrisburg, PA, to reside with her in 2012. Ms. Jessie loved gospel music, attending church and banging on the piano and organ. Very fashionable and a lover of jewelry, she “dressed to the hilt” with a ring on every finger and was “clean from head to toe.” On Sunday, January 5, 2020, Ms. Jesse transitioned from this life into eternal life joining her parents and her daughters, Mary Ann Robinson and Emma Jo Robinson, both of Amarillo, TX. Orqulla “Jessie Mae” Brown leaves to cherish and honor her legacy: son, Jessie Robinson Jr. of Houston, TX; daughter, Shirley Brown-James of Harrisburg, PA; a granddaughter, Patricia Ann Robinson of Victoria, TX, whom she raised as one of her own children; other relatives and friends. The last surviving member of her generation, Ms. Jessie will be missed by her children, grandchildren, great-grandchildren and great-great-grandchildren. Lovingly Submitted, The Family

The family of Ms. Orqulla Brown created this Life Tributes page to make it easy to share your memories.