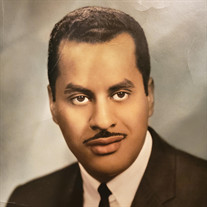 Oliver L. Roach, son of the late Beauregard Roach and the late Thelma Spann Roach, was born Friday, January 20, 1933, in Steelton, PA. Oliver graduated from the former Steelton High School and retired from the United States Air Force where he served honorably during the Korean War, Gulf War, Cuban Missile Crisis and the Vietnam War. While residing in Harrisburg, PA, Ollie, as he was known by family and friends, was united in Christian fellowship with Monumental A.M.E. Church, Steelton. For many years, he was a member of Mount Pisgah A.M.E. Church, Philadelphia, PA, where he served with the Usher and Trustee Ministries and helped raise money for youth groups with Super Market Sweeps at the ACME, Pilesgrove, NJ. An icon of his community, Ollie was best known most recently for his work with youth and the gospel concerts at Keswick Theater, Glenside, PA, helping to raise money for various youth groups. He was Founder of the Crestmont Halfway House which helped bring awareness of the drug problem in the Montco area and provided outlets, hope and recovery for many addicted to heroin, opioids and alcohol. A powerful civil rights activist and leader, Ollie organized buses to rally at the Poor People’s March on Washington; attended several of Dr. Martin Luther King’s speeches; and committed himself to ensuring inclusion and diversity before it was popular. Also, among his civic and fraternal memberships were the YMCA of Harrisburg, Citizens for Progress and the Optimist Club of Lower Montco. On Thursday, September 19, 2019, at eighty-six years of age, while at his home in Alloway, NJ, Ollie transitioned from time to eternity. He leaves to celebrate his life and honor his legacy his devoted wife of sixty-one years, Lara G. Roach of Alloway; daughters, Trina Roach of Germany, and Ronda C. Wells of Willingboro, NJ; son, Oliver Allen of Pittsburgh, PA; brother, Kenneth Roach (Lois), and sister, Joyce Roach Bradshaw, all of Harrisburg, PA; ten grandchildren, two great-grandchildren; nieces, nephews, cousins and friends. Ollie’s gentle spirit and quiet strength will be missed!

The family of Mr. Oliver L. Roach created this Life Tributes page to make it easy to share your memories.

Oliver L. Roach, son of the late Beauregard Roach and the late...

Send flowers to the Roach family.