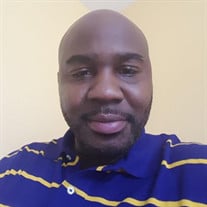 Nijel Damyez Coles was born in Harrisburg, PA, on Thursday, September 28, 1978, son of Elder Brenda L. Coles and Keith Solomon. Nijel transitioned on Saturday, January 16, 2021, from his earthly labor to his eternal reward. As Psalm 31 states how fleeting life is Nijel received his formal education in the Harrisburg Public School District, Glen Mills High School of Concordville, PA, and he later received his GED through a program sponsored by the Pennsylvania Department of Education. While enrolled at Glenn Mills, Nijel was an exceptional athlete. He was awarded the National High School Powerlifting Championship Plaque as a result of his accomplishments and was often referred to as the “Michael Jordan of the Football Field” by his coaches. He would later carry that same mentality into life, being perceived by others for his strong confident demeanor ready to face any obstacle head-on. Nijel was a born leader, very protective of those he held dear to his heart, a “Gentle Giant.” He was very selfless with a tendency to live for people around him, and not just for himself. If in need of anything, you could count on Nijel to come through. He had a special love and passion for his family and close friends. One of his favorite sayings was, “Let’s get it.” During his working career, he was employed by Vantage Food as a Distribution Lead for 4 ½ years and then advanced to better employment with Land O’Lakes Purina as a Machine Operator Manager. Nijel was an avid motivator to others including his co-workers, and was often heralded as a team player. In his downtime, you would catch Nijel spending time with friends, watching the Discovery ID Channel and, of course, watching his sports. He was a diehard Buffalo Bills, Portland Trail Blazer, and North Carolina Tar Heels fan; baby blue was his favorite color. Nijel was preceded in death by his maternal grandparents, Audrey L. and William E. Coles of Harrisburg, PA; paternal grandparents, Loretha Solomon and Raymond Scott, Jr., both of Harrisburg, PA. Nijel leaves behind his mother, Elder Brenda L. Coles; father, Keith Solomon; daughter, Zyiquania Hollinsworth; four brothers, Andrew L. Bates (Shacoya) of Pittsburgh, PA, Yohan Mosby, Theodore Solomon, Nickolas Carter, all of Harrisburg, PA; two sisters, Shy’Amber Williams, Nah’keedah Solomon, both of Harrisburg, PA; niece, A’zeria Bates; nephew, Daevon Bates of Pittsburgh, PA; his favorite aunt, Tamika Scott of Harrisburg, PA; close friend, Nyette Hunter of Harrisburg, PA; and a host of loving family and friends. FAMILY AND FRIENDS ARE ENCOURAGED TO CLICK ON THE SHARE A MEMORY TAB TO POST VIDEOS, SHARE MEMORIES, CONDOLENCES, REFLECTIONS OR SIMPLY YOUR NAME. CLICK ON THE PHOTOS & VIDEOS ON-LINE STREAMING OF SERVICE TAB OR MEDIA TAB (MOBILE) AND TRIBUTE WEBCAST TO VIEW SERVICE.

The family of Nijel Damyez Coles created this Life Tributes page to make it easy to share your memories.

Send flowers to the Coles family.