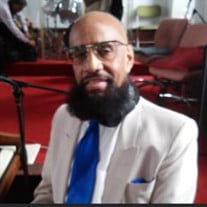 Moncy P. Smith III was born Sunday, February 12, 1950, in Harrisburg, Pennsylvania, the eldest son of the late Moncy P. Smith Jr. and the late Marion (Lewis) Smith. Moncy, affectionately known as “Skitch” or “Bates,” attended John Harris High School and Temple University. He later joined the U.S. Marine Corps serving in the U.S. and abroad in Spain, Lebanon and Turkey. He was honorably discharged as a Lance Corporal. He was formerly employed by the Penn Credit Corporation. Moncy was a gifted musician. He played the piano from a young age and became very skillful at his craft. When he was fifteen years old, he was approached by the world-renown jazz musician, Ramsey Lewis, at a local venue. Lewis told Moncy that he couldn’t believe a kid so young could play so well. Lewis said he would take Moncy on the road with him if he wasn’t so young. Moncy went on to play keyboards for several bands, most notably, Positive Force. This ‘80’s band produced the hit record, “We Got the Funk,” which topped the R&B charts in 1981. He was the recipient of the 717 Hip Hop Awards – Legend Award for his many years of music excellence in Central Pennsylvania. Moncy loved the Lord and he loved to play gospel music as well. He was a member of St. Paul Missionary Baptist Church of Harrisburg for over twenty-five years, under the tutelage of the late Rev. Franklin L. Henley. He was active in the Boy Scouts and the Sunday School at the church. He was a musician for the Tabernacle Baptist Church and later joined the Second Baptist Church of Harrisburg, under the leadership of Pastor A. J. Briley. Moncy made his earthly transition on Wednesday March 23, 2022, surrounded by his loving family. He was preceded in death by his parents, his brother, Cameron Smith; his sister, Lillian Richardson; and his nephew, Christian D. Smith. Surviving are his brother, Gayland Smith (Vicki) of Monroeville, PA; his sisters, Linda Bennett of Greensboro, NC, and Marcella Smith Raynor of Harrisburg; his nieces, Chinia Plant and Tikki Holden of Harrisburg, Shamika Smith of California, and Peggy Watson of Greensboro; his nephews, Terry and Tony Watson of Greensboro, and Mark Smith of California; his all-time favorite great-nephew/son, Jasir Plant; his great-nephew, Jah’mir Plant; great-niece, Jai’ana Plant, with his great-great-nephew, Akelius Plant; his special friend, Erma Cruz; along with other family members and friends. (SERVICE WILL BE DIRECTED BY THE FAMILY AND AT THE DISCRETION OF THE FAMILY.) FAMILY AND FRIENDS ARE ENCOURAGED TO CLICK ON THE SHARE A MEMORY TAB TO POST VIDEOS, SHARE MEMORIES, CONDOLENCES, REFLECTIONS OR SIMPLY YOUR NAME. CLICK ON THE PHOTOS & VIDEOS ON-LINE STREAMING OF SERVICE TAB OR MEDIA TAB (MOBILE) AND TRIBUTE WEBCAST TO VIEW SERVICE.

The family of Moncy P. Smith III created this Life Tributes page to make it easy to share your memories.