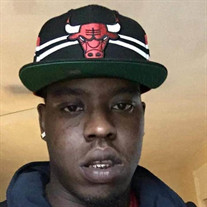 MICHAEL JAMES THORNTON was born Wednesday, October 30, 1985, in sunny Oceanside, California. Shortly after his birth, Michael was brought to New Jersey. He was full of energy, witty and enjoyed entertaining his family with his jokes. Wherever he went, laughter followed. As Michael got older, he kept this same personality continuing to be the center of laughter at family gatherings. Those who knew Michael knew he had a huge, loving heart. He could best be described as giving, affectionate and protective. He was a one-man band, moving to his own beat while everyone watched and admired. From his style to his conversation or even when he walked into a room, you knew he was going to capture everyone’s attention, especially, if there were women in that room. He had an uncanny and magnetic personality to woo anyone and everyone around him. When we think of Mike, it brings a smile to our faces and joy to our hearts. On Monday, July 20, 2020, Mike was called home to be with the Lord. He leaves behind two sons, Micah and Myelle; his parents, Reginald and Yolanda; siblings, Regina and Joshua; grandparents, Reginald Sr. and Mildred Thornton; great-aunt, Thalia Thornton (Nanny); uncle, James Thornton (Karyle); aunts, Maria Mosely (Tyrone), Christina Marion (Drew); nieces and nephews, Haven, Heaven, Hezekiah, Hadrial, Hevae; his favorite cousin, Bianca Marion who was born three days apart from Michael; best friend/brother, Brandon Boyd; ex-wife, Stacia Thornton; as well as a host of extended family and friends. Submitted in Sorrow and Everlasting Love, The Family of Michael James Thornton FAMILY AND FRIENDS ARE ENCOURAGED TO CLICK ON THE SHARE A MEMORY TAB TO POST VIDEOS, SHARE MEMORIES, CONDOLENCES, REFLECTIONS OR SIMPLY YOUR NAME ALLOWING THE FAMILY TO KNOW YOU ARE THINKING OF THEM. ON-LINE STREAMING OF SERVICE. CLICK ON THE PHOTOS & VIDEOS TAB OR MEDIA TAB (MOBILE) AND TRIBUTE WEBCAST TO VIEW.

MICHAEL JAMES THORNTON was born Wednesday, October 30, 1985, in sunny Oceanside, California. Shortly after his birth, Michael was brought to New Jersey. He was full of energy, witty and enjoyed entertaining his family with his jokes. Wherever... View Obituary & Service Information

The family of Michael James Thornton created this Life Tributes page to make it easy to share your memories.

Send flowers to the Thornton family.