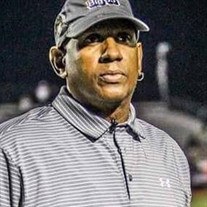 Michael L. Payton, a beloved son, father, grandchild, brother, uncle and friend, transitioned to his Heavenly Home on September 27, 2018. He fought a courageous battle against his health challenge, never questioning God’s promise that He will never leave him nor forsake him. In his forty-eight years of life, Michael accomplished many things that held him in high esteem; however, being a great dad and accepting God as his Lord and Savior were the two accomplishments that he held above all things. Michael was the youngest son of David C. Payton, Sr., and his beloved mother, the late Virginia M. Payton. He was born March 5, 1970 in Harrisburg, PA. Michael was a graduate of Central Dauphin East High School where he excelled on the football field. After graduation, it was Michael’s intent to play for Coach George Chaump at Indiana University of Pennsylvania (IUP). However, Coach Chaump accepted a position with Marshall University, West VA, and invited Michael to join him there. Although Michael was set at IUP, fatherly wisdom prevailed. His dad encouraged him to go back to Marshall because they played in a higher college football league. Michael was obedient and went back to Marshall as he was impressed by the staff, the campus and the football program. He later said, “I loved the place and loved the people, they stand behind their athletes.” Coach Chaump left in 1989, but Michael was true to the aforementioned quote and remained at Marshall. As a sophomore in 1990, he completed 199 of 347 passes for 2,409 yards, 12 touchdowns, and 16 interceptions. That season, Michael led Marshall to the NCAA Division I championship game, where the Herd finished as runners-up. He also set the Division I-AA record for season passing efficiency and was named "Southern Conference Player of the Year." Michael was also “West Virginia Athlete of the Year” and “Man of the Year for 1991.” In 1992, he completed 268 passes on 415 attempts for 3,610 yards, 31 touchdowns, and 12 interceptions. Michael was awarded the “Walter Payton Award” for that year and was a consensus first-term “All American.” Nope, he didn’t stop there! Michael went on to lead Marshall to the championship game, their first ever national title. He was again named “Southern Conference Player of the Year,” and “West Virginia Athlete of the Year.” Michael finished his college tenure as the “Southern Conference’s all-time career passing leader,” and received the “Walter Payton Award,” which is given annually to the best player in Division I-AA football. Michael is Marshall’s fourth highest ever passer with 9,411 career yards gained, exceeding the previous record by more than 2,300 yards. He was their fifth highest all-time scorer with 69 career touchdowns. After graduating from college, Michael played briefly with the Dallas Cowboys as a free agent. However, a serious health issue arose causing numbness in his foot. He collapsed after a couple months with Dallas, and was in danger of losing his leg. He returned to practice within three weeks but was dropped by Dallas days later. Few things stopped Michael Payton, he went on to play for the Saskatchewan Roughriders in the Canadian Football League. Michael continued on playing for the Arena Football League and the back-up quarterback for the Florida Bobcats in 1996. He was a member of the Central Dauphin East High School Hall of Fame, the Pennsylvania Hall of Fame (Capital Region) and the Pennsylvania State Hall of Fame. He was inducted into the Marshall University Athletic Hall of Fame in 1999 and in January 2015 Michael was one of 17 players elected to the College Football Hall of Fame. Michael was a Senior Counselor for Alternative Rehabilitation Communities, Inc., as well as a personal trainer and life coach. He was active with Drug Abuse Resistance Education and Big Brothers/Big Sisters of America. An avid golfer, Michael enjoyed friendly competitions with family and friends. He especially loved playing golf with his dad, son Donovan, and his brother David, Jr. David C. Payton, Sr., Michael’s dad, so humbly expressed that his heart is full of sorrow, but he is thankful to God for allowing him and Virginia to borrow Michael for 48 years. He has given them much joy and they are proud of his accomplishments. But to those reading Michael’s lifetime accomplishments, his parents' proudest moments were when Michael gave his life to Christ, joining The Greater Zion Missionary Baptist Church, and the birth of their grandson Donovan. From his parents to Michael: “How can we thank God enough for you in return for all the joy we have in the presence of our God because of you?” 1 Thessalonians 3:9 Michael’s life and memory will be cherished in the hearts of his father, David C. Payton, Sr., stepmother, D`Juna L. Payton of Harrisburg, PA; his sons, Kieran Leane of Canada and Donovan M. Payton of Harrisburg; his brother, David C. Payton, Jr., (Karin) of Harrisburg; stepbrother, Ryan L. Gaither (Sarah) of Chambersburg, PA; his maternal aunts and uncles, Judy A. Alfaro of Middletown, PA, Patricia A. Bass of Hyattsville, MD, James L. Campbell, Jr., of Middletown, and Todd E. Campbell (Camille) of Clinton, MD; his paternal aunts and uncles, Barbara L. Johnson (William) of Clarksville, TN, Gayle O. Wilson and Michael L. Payton (Judy) of Atlanta, GA. Michael’s life and legacy will also be honored and cherished by his nieces and nephews, Jasmyne R. Payton, David C. Payton, III, Michael E. Payton, Lillyana G. Gaither and Rylee L. Gaither. Along with his mother, Virginia M. Payton, Michael was also preceded in death by his maternal grandparents, James L. Campbell, Sr., and Doris M.; his paternal grandparents, David L. Payton and Burlena T.; and an uncle, Thomas L. Payton. In All Things We Give Thanks! Lovingly Submitted by the Family of Michael L. Payton

The family of Mr. Michael L. Payton created this Life Tributes page to make it easy to share your memories.

Send flowers to the Payton family.