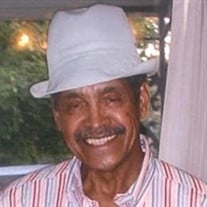 Merle Thomas Grigsby, son of the late Thomas Grigsby and the late Sarah Duffin Grigsby, was born Tuesday, September 27, 1927, in Steelton, Pennsylvania. Merle received his formal education in the Steelton School District. He had a keen interest in past and present politics, loved reading the New York Daily News, magazines and watching football games and the judge shows on TV. However, his most favorite interest was preparing for Christmas. He would start in September and end in January working late into the night to ensure to his satisfaction every light was lit and every reindeer was arranged in order. Merle was honest, conscientious, dependable, committed and dedicated. He worked thirty-two years at the Colonial Park Sears Store as well as the Colonial Park News Center and the Reading and Greeting East Shore Store. Upon his retirement, he returned to work part time at the Harrisburg Transit Center. This outstanding man and role model exemplified the value of hard work by working hard throughout his working career. At the blessed age of ninety, on Monday, July 16, 2018, at his Lower Paxton Township Home, Harrisburg, PA, Merle Thomas Grigsby transitioned from this life into eternal life. He leaves to celebrate his life and cherish many special memories his devoted wife of fifty-eight years, Estella Grigsby of Lower Paxton Township; his son, Merle Dayd of Reading, PA; his stepson, Richard Hill and his wife Priscilla of Pasadena, CA; brother, Vince Wilson; cousins, Geraldine Hamilton and Betty Worthy, all of Harrisburg; three grandchildren, four great-grandchildren; nephew, Vince Beamer; niece, Sharon Hester, all of whom will honor and emulate the legacy of “A Man of Integrity.” Lovingly and Respectfully Submitted, The Family of Mr. Merle Thomas Grigsby

The family of Mr. Merle Thomas Grigsby created this Life Tributes page to make it easy to share your memories.

Send flowers to the Grigsby family.