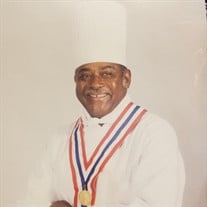 Melvin Hooks, 84 of Atlanta, Georgia, and most recently of Harrisburg, PA, transitioned into eternal life on Monday, January 25, 2021, at UPMC Harrisburg Hospital. He was born in Atlanta, GA, the eldest son of the late Lynette Kelly Hooks and Chef John A. Hooks. Melvin was educated in the Atlanta Public Schools and attended Morris Brown College. He was also a U.S. Army Veteran serving tours in Germany. Melvin's greatest joy was cooking; he cooked professionally for over 50 years becoming a Master Chef and serving in such capacities as owner of Hooks Catering Services and as Lead Culinary Instructor at Booker T. Washington High School. He also played an instrumental part in opening several restaurants in the Greater Atlanta area such as EJ’s and Mary Mack’s Tea Room as well as being the creative mastermind behind the delicious delicacies that were found at The Hidden Hill and Marietta Country Clubs. Chef Hooks, as he was affectionately known, catered thousands of events in the Atlanta area over the last four decades and won several culinary awards as well as being named teacher-of-the-year. Melvin was a member of the American Culinary Federation and the Chef’s Association of Greater Atlanta where he served in many executive board positions. Melvin loved classical music and attended many symphonies in his spare time. Melvin was preceded in death by his parents. He leaves to celebrate his life: his children, Arthur E. Hooks (Linda), Sheryl Hooks, and Stanley B. Hooks (Katrina), all of Atlanta, GA; his siblings, Gloria L. Hamm of Harrisburg, PA, and Johnny A. Hooks of Atlanta, GA; 16 grandchildren, 28 great-grandchildren along with a host of family and friends. COVID-19 Guidelines will be observed with face masks and six feet social distancing for all attendees. The Family would be honored for donations to be made in memory of Melvin Hook’s life to be directed to The First Baptist Church of Steelton, 1850 South 19th Street, Harrisburg, PA 17104. FAMILY AND FRIENDS ARE ENCOURAGED TO CLICK ON THE SHARE A MEMORY TAB TO POST VIDEOS, SHARE MEMORIES, CONDOLENCES, REFLECTIONS OR SIMPLY YOUR NAME. CLICK ON THE PHOTOS & VIDEOS ON-LINE STREAMING OF SERVICE TAB OR MEDIA TAB (MOBILE) AND TRIBUTE WEBCAST TO VIEW SERVICE.

Melvin Hooks, 84 of Atlanta, Georgia, and most recently of Harrisburg, PA, transitioned into eternal life on Monday, January 25, 2021, at UPMC Harrisburg Hospital. He was born in Atlanta, GA, the eldest son of the late Lynette Kelly Hooks and... View Obituary & Service Information

The family of Melvin Hooks created this Life Tributes page to make it easy to share your memories.

Melvin Hooks, 84 of Atlanta, Georgia, and most recently of Harrisburg,...

Send flowers to the Hooks family.