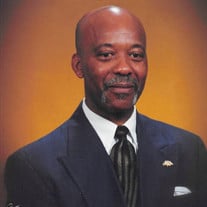 Maurice Caldwell, beloved family patriarch, was born Sunday, May 14, 1944, in Foreman, Arkansas. He was the son of the late Christine Caldwell and was raised by his grandparents, the late James and Theola Caldwell. Maurice was a graduate of Unity High School, Class of 1963, in Foreman, Arkansas, and upon his high school graduation, he moved to Harrisburg, Pennsylvania. Maurice was employed by the Commonwealth of Pennsylvania, Department of General Services, from 1966 until his retirement in 1996. Upon retirement, he worked part-time at Giant Food until 2007. In 1974, Maurice met Karen, the love-of-his-life, and they married on June 14, 1975. God blessed them with forty-six years of marriage. Maurice was a member and faithfully attended St. Jacob’s Kimmerlings Church, Lebanon, Pennsylvania. He was a dedicated member of the Coalition of Black Trade Unionists (CBTU) and AFSCME Retirees, Chapter 13, where he served on the Executive Board. Maurice loved life, and he loved his family and friends. His children and grandchildren were his pride and joy. Maurice was the “social butterfly” of the family. He was a weekly visitor to the Broad Street Market where he enjoyed spending time with his friends and greeting people as they walked through the market. Maurice was an avid fan of the Harrisburg Cougars; you would find him at every game cheering them on and, naturally, greeting everyone with his big smile and warm handshake. At 2:30 a.m., on Sunday, September 12, 2021, Maurice finished his race and won his prize of eternal life. He was preceded in death by his mother, Christine Caldwell; grandparents, James and Theola Caldwell; son, Kirk Caldwell; daughter, Jana Caldwell Murphy; and grandson, KJ Caldwell. Maurice leaves to cherish irreplaceable memories of his life: his loving wife, Karen Caldwell; two sons, Adrian and James Caldwell; two daughters, Clarise Dena Wallace and Tonya Jean Blount Ross (Demetrius); four granddaughters, Tiffany Hunter, Kasey Caldwell, Naiera Caldwell and Malaysia Murphy; one grandson, Adrian Caldwell; three great-granddaughters, one great-grandson and a host of extended family and friends. Memorial gifts to PA Wounded Warriors, Inc., 1117 Country Club Road, Camp Hill, PA 17011 MASKS REQUIRED TO ATTEND VIEWING AND PRIVATE SERVICE. FAMILY AND FRIENDS ARE ENCOURAGED TO CLICK ON THE SHARE A MEMORY TAB TO POST VIDEOS, SHARE MEMORIES, CONDOLENCES, REFLECTIONS OR SIMPLY YOUR NAME. CLICK ON THE PHOTOS & VIDEOS ON-LINE STREAMING OF SERVICE TAB OR MEDIA TAB (MOBILE) AND TRIBUTE WEBCAST TO VIEW SERVICE.

Maurice Caldwell, beloved family patriarch, was born Sunday, May 14, 1944, in Foreman, Arkansas. He was the son of the late Christine Caldwell and was raised by his grandparents, the late James and Theola Caldwell. Maurice was a graduate of... View Obituary & Service Information

The family of Maurice Caldwell created this Life Tributes page to make it easy to share your memories.

Send flowers to the Caldwell family.