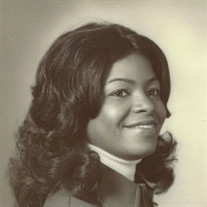 ~~~~~~~~~~~~~~~~~~~~~~~~~~~~~~~ “For God so loved the world, that he gave his only begotten son, that whosoever believeth in him should not perish, but have everlasting life.” John 3:16 ~~~~~~~~~~~~~~~~~~~~~~~~~~ MARY L. SMITH was born on July 24, 1944 in Harrisburg, Pennsylvania to the union of the late Maxwell Owens, Sr. and the late Edna Braxton Owens. Her mother blessed her with the nickname “Tojo,” which many of her family and friends refer to her as. Mary received her formal education in the Harrisburg School District and was a graduate of the former John Harris High School, where she was honored as Teen Queen in her senior year. During her working career, Mary was an employee of the Federal Government, Social Security Administration as a Claims Representative for 37 years from where she retired in 2001. Having accepted the Lord as her personal Savior, she joined The Greater Zion Missionary Baptist Church in 2002, where she served on the Culinary Ministry. Mary was blessed with one son, Samuel Clark Pendleton, III, whom she adored and had given the nickname “Peppy” because of his boundless energy as a child. She made sure that he wanted for nothing. Mary would look forward to Sam coming home for visits from New York, preparing for him home-cooked meals. When he would leave to return to New York, she would pack up all kinds of food and goodies for him to share with his co-workers. When Mary traveled to New York, she stayed busy shopping at favorite department stores like Macy’s and Bloomingdale’s, going to Broadway plays and eating at all the eclectic restaurants that New York has to offer. Mary was united in holy matrimony to the love of her life, the late Albert Smith. Mary and Al loved to travel. Niagara Falls was one of their favorite places to visit. They also loved traveling to New England, and points down south as well as east and west. They would have so much fun, just the two of them, whatever they were doing. After her husband died, Mary continued to travel by taking cruises and bus trips with her beloved girlfriends. She would keep everyone laughing but would also tell it to you straight. Mary, being the only sister among five brothers, became their rock. She loved each and every one of them, and although they were maddening at times, she still offered her unconditional support. When it came to friendship you could not find anyone more supportive than Mary. She was a true friend and a caring and generous person. She helped so many people in so many ways. She loved all of her nieces and nephews, and would always share things that were going on in their lives. Mary also loved to entertain. She was famous for her cookouts and holiday dinners. She would make her popular potato salad, barbecue ribs, collard greens, fried chicken, pineapple upside-down cake and of course on New Year’s Day, her pork and sauerkraut, mashed potatoes and cornbread. In addition to her parents and her husband, Mary was also preceded in death by her two brothers, Maxwell Owens, Jr. and Paul Owens as well as step-daughter Karen Horner. On Sunday, April 1, 2018, at the Carolyn Croxton Sloane Hospice House with her son by her side, Mary transitioned to be with her Lord and Savior after an enduring illness. She leaves to celebrate her life, her loving son, Samuel C. Pendleton, III of Brooklyn, New York; one step-son, Paul Smith of Lancaster, Pennsylvania; three brothers, Michael Owens, Sr. of Charlotte, North Carolina, Anthony Owens, Sr. (Joanne) of Harrisburg, Pennsylvania, Allen “Cedric” McFarland (Essie) of Decatur, Georgia, sister-in-law Lorna Owens of Harrisburg, Pennsylvania, and several nieces, nephews, cousins and other relatives and friends. Giving God all Glory, Honor and Praise, Lovingly Submitted, The Family

The family of Mrs. Mary L. Smith created this Life Tributes page to make it easy to share your memories.

Send flowers to the Smith family.