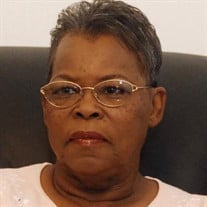 MARY ELLEN RAMSEY, 79, was called to be with her Lord on Monday, January 21, 2019, at home in Upper Marlboro, Maryland, surrounded by her children and their loving spouses. Mary was born on December 21, 1939, in Sumter, South Carolina, the oldest of seven children raised by the late Sidney Crosson Sr. and Louise Hunter Crosson. After moving from Sumter to Steelton, Pennsylvania, Mary graduated from Steelton-Highspire High School (Steel High). After graduating from Steel High in 1960, she graduated from the Thompson Institute – Harrisburg’s Secretarial Program. Mary held various jobs during her life, including a job as an elevator operator at the Harrisburger Hotel where she would meet her late husband – George L. Ramsey Sr., a job as a clerk at the Pennsylvania Department of Health and Welfare and as a custodian for Harrisburg Area Community College from which she retired. Mary was a faithful member of Monumental A.M.E Church, Steelton, where her family joined after moving from Sumter. For a time, she served as an usher, then a stewardess, and she assisted with the delivery of Meals on Wheels. In addition to serving, Mary loved to sing. Mary asked the Lord, one day to give her a voice so that she could sing for him. After He lovingly granted her request, Mary then served on the Combined Choir where she was finally able to sing for the Lord for many years. Just as faithful as she was in her service to the Lord, Mary was equally as faithful to her family. She cared for her parents, as their health declined. She stood by her husband through the many trials they would face together, including caring for him as he battled cancer. She willingly sacrificed to make sure that her children were taken care of — all while shielding them from just how tight things were. She was someone whom her siblings, nieces, nephews, and other family members could always rely on to give wise and loving counsel and be a strong shoulder to cry on. As the faithful friend, she was the one whom could be called on for help when needed. An exceptional employee, HACC often chose her to support their most important functions. As that forgiving lender everyone dreams about, she was the one to come to when you needed help with paying the water bill, light bill, or tax notice, or with just putting some food on the table; all while not requiring repayment. Mary Ellen Ramsey is survived by her daughter, Michelle Carrington (Brian) of Upper Marlboro, MD; son, George L. Ramsey Jr. (Sonya) of Los Angeles, CA; brothers, Matthew, Charles and Thomas Crosson, all of Harrisburg; sisters, Sarah Tilman of Atlanta, GA, Rosa McCormick of Steelton; grandsons, Bryce and Jeremy Carrington; as well as numerous cousins, other relatives, and friends. Lovingly Submitted, The Family of Mary Ellen Ramsey

MARY ELLEN RAMSEY, 79, was called to be with her Lord on Monday, January 21, 2019, at home in Upper Marlboro, Maryland, surrounded by her children and their loving spouses. Mary was born on December 21, 1939, in Sumter, South Carolina, the oldest... View Obituary & Service Information

The family of Mrs. Mary Ellen Ramsey created this Life Tributes page to make it easy to share your memories.

MARY ELLEN RAMSEY, 79, was called to be with her Lord on Monday,...

Send flowers to the Ramsey family.