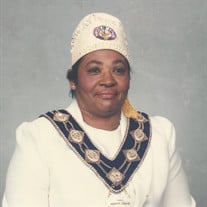 Mary Annette Gibson was born on Saturday, July 28, 1934, in Steelton, PA, to the late Ruth Irvin Jackson Slaughter and the late Lewis H. Jackson Jr. Annette, as she was affectionately known, was educated at the old Hygienic Elementary School and later graduated from the former Steelton High School, Class of 1952. She then continued her education in Boston, MA, where she pursued her Nursing Degree. After nursing school, she worked at the Harrisburg Hospital Critical Care Unit and retired after forty years of service. She later worked for the Dauphin County Adult Probation and Work Release Center and the District Attorney’s Office where she retired in 1995. In 2000, Annette went back to work part time for Dauphin County as a court clerk for the Honorable Judge John F. Cherry until 2007. Annette accepted Christ as her personal Savior at an early age and joined The First Baptist Church of Steelton where she remained an active member until her declining health. She loved the Choir Ministry and sang in the choir for many years. Annette was united in holy matrimony in Hagerstown, MD, to James “Bubba” Gibson, and they enjoyed each other’s company for thirty-five years until he preceded her in death on March 28, 2015. She was a former Daughter of the Steelton Cyrene Lodge #169, and in her younger days, she was the head majorette of their drill team. She also was a member of the Donald P. Wilson Riding Club. Annette loved horseback riding, listening to jazz music, dancing, playing cards, slot machines and traveling with her late husband. On Wednesday, July 18, 2018, Annette transitioned into eternal life joining her parents and her stepdaughter, Vivian Darnell Gibson Lyles. She leaves to celebrate her life one son, Lance “Spike” Slaughter (Gaye); one daughter, Andrea “Bebes” Johnson, both of Harrisburg, PA; her five grandsons, Charles Johnson of Steelton, PA, Eric Slaughter of Chicago, IL, Lance Slaughter II of Tempe, AZ, Leonard Monroe (Martiza) of Brandon, FL, Willie Lyles of Harrisburg; four granddaughters, Darnae Anderson of Casselberry, FL, Jameanna Lyles of Jacksonville, FL, Tia Monroe of Harrisburg, and Sharita Gibson of Harrisburg, who was her caregiver; one goddaughter, Nicole Brown of Harrisburg; fifteen great-grandchildren, one great-great-grandchild and a host of other family members and friends. Lovingly Submitted by the Family of Mary Annette Gibson

Mary Annette Gibson was born on Saturday, July 28, 1934, in Steelton, PA, to the late Ruth Irvin Jackson Slaughter and the late Lewis H. Jackson Jr. Annette, as she was affectionately known, was educated at the old Hygienic Elementary School... View Obituary & Service Information

The family of Mrs. Mary Annette Gibson created this Life Tributes page to make it easy to share your memories.

Send flowers to the Gibson family.