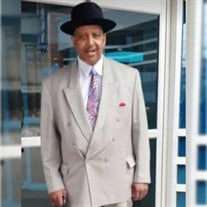 Mark Keith Spradley, the second of four children of the late Lester C. Spradley and the late Zola Spradley, was born Monday, April 23, 1956, in Harrisburg, PA. A graduate of Harrisburg High School, Class of 1974, Mark, thereafter, enlisted in the United States Marine Corps proudly serving his country and receiving an honorable discharge in 1976. He was employed by the New Cumberland Army Depot retiring after thirty-five years of service. Having accepted Jesus Christ as his personal Savior, Mark united in Christian fellowship with Goodwin Memorial Baptist Church. As a dedicated member, he embodied himself into the work of the Lord serving many years as an usher, assisting with the food bank, feeding the homeless and preparing meals. Mark enjoyed reading his Bible, sports, traveling, cooking and was an active member of the American Legion, Post 733. On Saturday, January 9, 2021, Mark went home to be with the Lord at sixty-four years of age. Having no children of his own, Mark leaves to celebrate his life three siblings, Leslie Allen, Lorrie Smith and Rory Spradley, all of Harrisburg, PA; nieces, Serena Saunders-Bagna, LaShanna Smith, nephews, Chad Allen, Terrell Spradley, Dawan Smith, all of Harrisburg, PA; as well as a host of other family members and friends. FAMILY AND FRIENDS ARE ENCOURAGED TO CLICK ON THE SHARE A MEMORY TAB TO POST VIDEOS, SHARE MEMORIES, CONDOLENCES, REFLECTIONS OR SIMPLY YOUR NAME.

The family of Mark Keith Spradley created this Life Tributes page to make it easy to share your memories.

Mark Keith Spradley, the second of four children of the late...

Send flowers to the Spradley family.