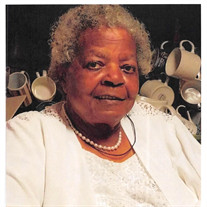 “For I know the plans I have for you, declares the Lord, plans to prosper you and not to harm you, plans to give you hope and a future.” (Jeremiah 29:11) Margaret Rebecca Hinton was born Margaret R. Jones to the late Benjamin and Agnes Jones on December 30, 1929, in Harrisburg, Pennsylvania. She was educated at the former William Penn High School where she graduated in 1947 with a vocational focus on secretarial work. Her employment path included Kunkel Law Firm as a law secretary, the federal government and several positions with the Harrisburg School District until her retirement in 1994. Additionally, she was active in her community and served as a youth worker for the YWCA of Greater Harrisburg. As a child, she was baptized and raised at Second Baptist Church. She later became an active member of Mt. Sinai AME Church where she served on the Steward Board, Missionary Board and member of the Lay Organization. Margaret enjoyed gardening, playing the piano, puzzles, especially cryptograms, reading her Bible, spending time with her family and writing poetry for various occasions some of which were published and leave a legacy for future generations. Margaret met the love-of-her-life, LeRoy E. Hinton, while he was stationed in Harrisburg, during his active military tour of duty. They spent forty-nine wonderful years together until his passing in 2001. Margaret Rebecca (Jones) Hinton entered eternal life on December 14, 2020. She was preceded in death by her parents, Benjamin and Agnes Jones; husband, LeRoy E. Hinton; sisters, Bertha (James), Jeanette (Wellington), Elizabeth (Lawrence); brothers, Walter (Paulette), Edward (Irma); as well as great-grandson, Dontae Winfield. She leaves to mourn her passing and celebrate her life seven children, Edward (Barbara), Rosemarie, LeRoy, Michael (Beth Ann), Patricia, Julia (George), Lawrence (Lisa); loving nephew, Richard Mckay (Joyce); fifteen grandchildren, David, Daleenna, Deia, Darius, Samuel, MaDonna, Andrew, Merita, Mervin, George, Maxwell, Brian, Michael Jr., Brittany and Raven; twenty-one great-grandchildren, six great-great-grandchildren; and a host of other family members and friends. PRIVATE GRAVESIDE SERVICE In lieu of flowers, donations may be made to the YWCA of Greater Harrisburg. FAMILY AND FRIENDS ARE ENCOURAGED TO CLICK ON THE SHARE A MEMORY TAB TO POST VIDEOS, SHARE MEMORIES, CONDOLENCES, REFLECTIONS OR SIMPLY YOUR NAME ALLOWING THE FAMILY TO KNOW YOU ARE THINKING OF THEM.

&#8220;For I know the plans I have for you, declares the Lord, plans to prosper you and not to harm you, plans to give you hope and a future.&#8221; (Jeremiah 29:11) Margaret Rebecca Hinton was born Margaret R. Jones to the late Benjamin and... View Obituary & Service Information

The family of Margaret Rebecca Hinton created this Life Tributes page to make it easy to share your memories.

“For I know the plans I have for you, declares the Lord, plans...

Send flowers to the Hinton family.