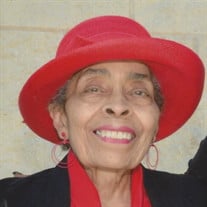 Loretta O. Richardson, daughter of the late Judson and Melissa Paige, was born Monday, July 19, 1926, in Bressler, PA. Loretta graduated from the former Swatara Twp. High School, Class of 1944. She married James B. Richardson Jr. who preceded her in death. Their union was blessed with three sons. After thirty-four years of federal government service, Loretta retired from the Mechanicsburg Naval Depot on August 26, 1985. As a member of Frontiers International, Inc., she embraced its civic commitments to the Afro-American Community. As a lifetime member of The First Baptist Church of Steelton, she faithfully attended Tuesday Noonday Prayer and encouraged others to do so. She served with the Deaconess Ministry, the Hospitality Ministry as President for many years as well as in numerous other capacities. Loretta was a prayer warrior who loved her God and witnessing of His goodness. She was quick to share just the appropriate scripture for any life situation along with godly advice. Committed to her daily personal devotions, she studied the Word and read her Bible in its entirety at least three times or more. Some of her favorite scriptures were Isaiah 49:16, “Behold I have graven thee upon the palms of my hands: thy walls are continually before me,” and Jeremiah 33:3, “Call unto me, and I will answer thee, and shew thee great and mighty things, which thou knowest not.” Even during the latter part of her life during sickness, she would throw her hands up thanking and praising God. She was always an uplifter and encourager never speaking negatively of anyone. Loretta lived her love, and she unselfishly gave her love in so many ways. Deeply devoted to and so very proud of her family, she especially loved family gatherings. Just being around her tribe, as she called them, were precious moments. She loved being outside talking to neighbors or just admiring the beauty of nature. Her family craved her delicious Watergate, yellow and applesauce raisin cakes, baked mac and cheese and potato salad which were second-to-none. Also, she enjoyed working crossword puzzles, dancing, the live performances of Bible stories at the Sight & Sound Theater, Lancaster, PA, and having long telephone conversations with family and friends. In the early morning hours of Thursday, August 22, 2019, at the blessed age of ninety-three, Loretta O. Richardson triumphantly transitioned from labor to reward joining in eternal life her parents, her husband and three brothers, Jessie (her twin), Alvin and Marcus Paige. She leaves to cherish irreplaceable memories and strive to emulate her spirit of faith, love and dedication: three sons, Keith J. Richardson (Maria) of Laurel, MD, Mark R. Richardson (Anne) and Craig D. Richardson of Harrisburg, PA; twelve grandchildren, twenty-three great-grandchildren, three great-great-grandchildren, nieces, nephews, cousins and friends. Giving God all Glory, Honor and Praise, The Family of Mrs. Loretta O. Richardson

The family of Mrs. Loretta O. Richardson created this Life Tributes page to make it easy to share your memories.

Loretta O. Richardson, daughter of the late Judson and Melissa...

Send flowers to the Richardson family.