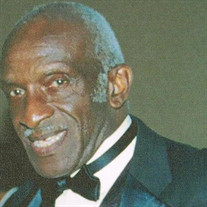 Lloyd Tillman, son of the late Stewart Tillman and the late Lucille Madison Tillman, was born Monday, December 29, 1930, in Baltimore, Maryland. Lloyd grew up in Baltimore and was educated in the Baltimore School System. He attended Paul Laurence Dunbar High School. In 1948, Lloyd enlisted in the United States Army and was assigned to numerous army bases during his twenty-year tenure. He especially loved and spoke extensively of his assignments in Germany. During his military career, Lloyd advanced to professional levels playing ping pong winning many competitions and trophies. Additionally, Lloyd’s ability to drive just about everything and anything elevated him to being the motor pool trainer of all drivable equipment. Lloyd went back to school and became an ophthalmic lab technician. His career path ended with retirement from Consolidated Freight (CF) as a tractor trailer driver. Always very active, Lloyd enjoyed bowling, tinkering on the piano and singing. He meticulously loved caring for his home, garden and cars, especially his Mustangs and motor home—all the family as well! After departing the military, Lloyd accepted Christ as his personal Savior. In 1981, he met and married the love-of- his-life, Wildred Gordon. Lloyd nurtured their blended families with a warm and loving heart. They were united in Christian fellowship with From the Heart Church Ministries of Harrisburg where they zealously served. Lloyd served on the Board of Trustees; the Men’s Choir, singing, “Your Grace and Mercy;” as well as with the Ministerial and Intercessory Prayer Ministries. Lloyd loved to travel with family. He and Wildred retraced his army footprints traveling in the states and overseas. They loved traveling to Germany visiting family. Wildred lovingly cared for Lloyd when illness struck praying with him and for him. On Sunday, October 6, 2019, at eighty-eight years of age, Lloyd went home to be present with his Lord and Savior. Along with his parents, he was also preceded in death by brothers, Arthur, William, Malcolm and Allen; sisters, Sarah and Marian; and daughter Claudia. Lloyd leaves to celebrate his life and cherish irreplaceable memories his loving and devoted wife, Wildred Tillman; daughter Claudette; sons, Lloyd Jr. and Allison Thomas; brother Milton; grandchildren, Jerri (David), Monice (Adrian-deceased), Tiffany, Shanae, Jennifer, Eric, Jordan and Philip; great-grandchildren, Jeremy, Nae, Adria, Adrian, Nicholas, Lea and Luca; great-great-grandchild Hayden; and a host of nieces, nephews, other relatives, special friends who helped Wildred and neighbors. Submitted with our Everlasting Love, The Family

Lloyd Tillman, son of the late Stewart Tillman and the late Lucille Madison Tillman, was born Monday, December 29, 1930, in Baltimore, Maryland. Lloyd grew up in Baltimore and was educated in the Baltimore School System. He attended Paul Laurence... View Obituary & Service Information

The family of Mr. Lloyd Tillman created this Life Tributes page to make it easy to share your memories.

Lloyd Tillman, son of the late Stewart Tillman and the late Lucille...

Send flowers to the Tillman family.