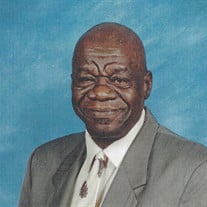 Lester David Babil Jr. ~~~~~ “We are confident, I say, and willing rather to be absent from the body and to be present with the Lord.” II Corinthians 5:8 ~~~~~~~~ Lester, known as “Doll Baby” by family and friends, was born March 18, 1941, in Longwood, North Carolina, to the late Thelma “Sug” Manning Babil and the late Lester D. Babil. Lester attended Swatara Junior High School where he participated in football, track and field. He graduated from Central Dauphin High School, Class of 1959. After over thirty years of service, Lester retired from Tyco formerly AMP Inc. He was united in Christian fellowship with Harambee United Church of Christ, presently known as Kingdom Embassy, where he was its oldest member. There, he was known as Elder Babil and was an avid cook. Lester attended church until his declining health and, thereafter, studied at home with Jehovah’s Witnesses. Among Lester’s most enjoyable pastimes were watching old westerns, March Madness, basketball, football, going to Atlantic City as well as traveling with and serving as President of a group called, “The Fun Bunch.” In his seventy-sixth year, while at UPMC Pinnacle Community Osteopathic Hospital, on Friday, March 2, 2018, at 8:30 a.m., the angels came to escort Lester safely into the Arms of his Heavenly Father joining in eternal life his parents and his three siblings, Samuel “Doc” Manning, Walter McCoy Babil and Vergie Elaine Smith. Lester leaves to honor his legacy and cherish many special memories his daughters, Rhonda “Sue” (James), Leslie “Tubby,” Joy “Mama,” all of Harrisburg, PA; sons, Octavius “Pookie” (Lisa) of Harrisburg, Lester “Hoy” (Joyce) of Enola, PA, David L. (Lenita), Newport News, VA, Naval Base; brothers, Leon, Michael and Adrian “Aggie” Babil, all of Harrisburg; sister, Mary Babil of Harrisburg; nine grandchildren, two great-grandchildren; and a host of nieces, nephews, cousins and friends.

Lester David Babil Jr. ~~~~~ &#8220;We are confident, I say, and willing rather to be absent from the body and to be present with the Lord.&#8221; II Corinthians... View Obituary & Service Information

The family of Mr. Lester David Babil Jr. created this Life Tributes page to make it easy to share your memories.

Send flowers to the Babil family.