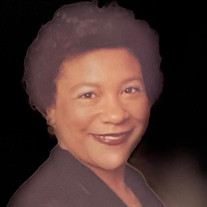 Leroyce Ann Jackson, daughter of late Leroy Duffin and the late Carrie (Knight) Arnette, was born Wednesday, October 3, 1945, in Harrisburg, Pennsylvania. A graduate of the former William Penn High School, her employment path included the Commonwealth of Pennsylvania, Harrisburg State Hospital, and in the healthcare field at various healthcare facilities throughout Central Pennsylvania and Milwaukee, Wisconsin. She retired from the healthcare field in 2015. For the latter part of her life, Leroyce was united in Christian fellowship with Goodwin Memorial Baptist Church. One of her greatest joys was spending time with her family playing pity-pat. Leroyce also cherished the times she spent shopping with her longtime girlfriends as well as traveling when she could, telling stories about the “good-ole” days, watching her soap operas--she would stop everything so as not to miss any drama--, and watching all types of crime shows, especially, “Law and Order.” An excellent cook, Leroyce’s signature fried chicken was sought after as second-to-none. At seventy-five years of age while at UPMC Harrisburg Hospital on Sunday, January 3, 2021, Leroyce A. Jackson transitioned from time to eternity joining her parents and two brothers, William Knight and Richard Harvey. Leroyce leaves to celebrate her life two siblings, Edward “Bingo” Harvey of Denver, Colorado, and Jean Williams (George) of Waynesboro, Pennsylvania; her children, Robert “Stretch” Jackson (China); daughter, Kimberly Singleton, all of Harrisburg, Pennsylvania; son-in-law, Bilal Singleton of Lancaster, Pennsylvania; grandchildren, Brian Jackson (Jazzy) of Lancaster, Pennsylvania, Amari Barber of Harrisburg, Pennsylvania, London Jackson of Lancaster, Pennsylvania, Robert Jackson, Jr. and Riana Jackson, both of Harrisburg, Pennsylvania; five great-grandchildren, other family members and friends. Leroyce always had her signature smile that could always light up a room. FAMILY AND FRIENDS ARE ENCOURAGED TO CLICK ON THE SHARE A MEMORY TAB TO POST VIDEOS, SHARE MEMORIES, CONDOLENCES, REFLECTIONS OR SIMPLY YOUR NAME ALLOWING THE FAMILY TO KNOW YOU ARE THINKING OF THEM. CLICK ON THE PHOTOS & VIDEOS ON-LINE STREAMING OF SERVICE TAB OR MEDIA TAB (MOBILE) AND TRIBUTE WEBCAST TO VIEW.

The family of Leroyce Ann Jackson created this Life Tributes page to make it easy to share your memories.