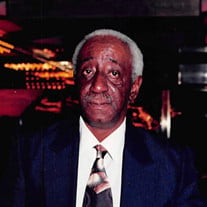 Leroy Lockwood was born Friday, November 22, 1946, in Philadelphia, PA. He was raised by the late Marian and Arthur Striggles of Philadelphia. Leroy received his formal education in the Philadelphia School System. He met and married Carol Davis, and this union was blessed with daughter Sheila and son Leroy Jr. In his younger years, Leroy learned the meaning of hard work from his “Pop” Arthur Striggles. He worked as a tailor and line cook after leaving school. His admiration for these jobs made him a man of original style, and he acquired a love for making delicious meals at breakfast and cookouts. In his twenties, Leroy launched a job at the Budd Company, Philadelphia, where he remained and retired after thirty-five years of service. Leroy met and married his wife Lenora Lockwood, and this union was blessed with two sons, Rodney and Octavian. Leroy was a man who believed family was most important. He loved spending time and talking to his children providing wisdom, encouragement and a good laugh with each occasion. An avid Dallas Cowboys fan, Leroy loved watching sports, playing chess, computer games and easy listening music to include Frank Sinatra, the Whispers and Smokey Robinson. He also enjoyed the fellowship of the Villages Social Club, and he especially appreciated time spent with his granddaughter Aubrey. At seventy-three years of age, the Lord called Leroy into rest on Sunday, August 23, 2020, joining in eternal life "Pop" Arthur Striggles and Marian Striggles, as well as two brothers, James and Irvin Lockwood. Leroy leaves to cherish and honor his legacy: his devoted wife, Lenora Lockwood of Harrisburg, PA; three sons, Leroy Lockwood Jr. (Yolanda) of Pembroke, NC, Rodney Lockwood and Octavian Lockwood, both of Harrisburg; one daughter, Sheila Charleston (Eric) of Philadelphia, PA; two sisters, Alleene Timazee (Karsin) of Port St. Lucie, FL, Judith Johnson (Charles) of Greeneville, TN; one brother, Dennis Anderson (Felicia) of Philadelphia; his five grandchildren, Kristen Hunter, Kyle Mole, Shaun Charleston, all of Philadelphia, Aubrey Lockwood of Harrisburg, Daniel Martin of Philadelphia; two great-grandchildren, Zymire and Zaniyah King, both of Philadelphia; sister-in-law, Marge Lockwood of Philadelphia; other family members and friends. FAMILY AND FRIENDS ARE ENCOURAGED TO CLICK ON THE SHARE A MEMORY TAB TO POST VIDEOS, SHARE MEMORIES, CONDOLENCES, REFLECTIONS OR SIMPLY YOUR NAME ALLOWING THE FAMILY TO KNOW YOU ARE THINKING OF THEM.

Leroy Lockwood was born Friday, November 22, 1946, in Philadelphia, PA. He was raised by the late Marian and Arthur Striggles of Philadelphia. Leroy received his formal education in the Philadelphia School System. He met and married Carol... View Obituary & Service Information

The family of Leroy Lockwood created this Life Tributes page to make it easy to share your memories.

Send flowers to the Lockwood family.