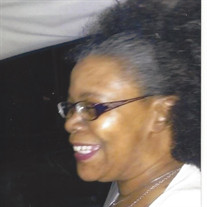 Karmel was born Monday, January 15, 1962, to the late Queen E. Plummer and Lewis Brown. Karmel gained her education through the Harrisburg School District. Leading a bright future as a CNA helping others, she worked at the Leader and Harrisfield Nursing Homes. She dedicated her life to caring for her beloved son, Michael L. “Bud” Plummer, who preceded her in death on February 2, 2015. She cared for Michael for thirty-two years making sure her “Bud” had no pain or worries. That was her most prized possession. Karmel’s personality was out-of-this-world. She would light up a room with her presence and with her being so very outspoken, anyone in that room had no choice but to listen to whatever she had to say and you’d better like it. Karmel was no ordinary woman, but much-much more. She loved to cook, sing and nurture everyone. Although she loved family, she had no problem telling you off, then putting you out, only to bring you back in with a good meal. Called “MUM-MUM” and “NAN-NAN” by her grandchildren, Karmel loved and adored her grandchildren spoiling them not only with material things but with love. Even in her final days, she would get up to assist with breakfast and their daily routines. On Wednesday, September 12, 2018, at fifty-six years of age at her home in Steelton, Pennsylvania, surrounded by family and loved ones, Karmel F. Plummer transitioned from this life joining in eternal life her parents, her son, her brother, Wesley A. Plummer, and her sister, Marlene D. Plummer. Her life and memory will be cherished in the hearts of her daughter, Shante Plummer; two brothers, Thomas E. Plummer, Terrance C. Plummer; two sisters-in-law, Robin D. Plummer, Linda C. Plummer; seven grandchildren, H`vnly N. Johnson, Maurice, Malic, Michael, Micah, Micai and Mi`Cayla Karmel Thomas; and a special and close friend, Dane Prunty. Karmel is also survived by a host of aunts, uncles, nieces, nephews, cousins and friends. Lovingly Submitted, The Family of Karmel F. Plummer

Karmel was born Monday, January 15, 1962, to the late Queen E. Plummer and Lewis Brown. Karmel gained her education through the Harrisburg School District. Leading a bright future as a CNA helping others, she worked at the Leader and Harrisfield... View Obituary & Service Information

The family of Ms. Karmel F. Plummer created this Life Tributes page to make it easy to share your memories.

Send flowers to the Plummer family.