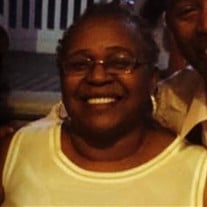 ~~~~~~~~~~~~ “In my Father’s house are many mansions: if it were not so, I would have told you. I go to prepare a place for you.” John 14:2 ~~~~~~~~~~~~~~~~~~~~~~~~ Jymara was born on Saturday, August 15, 1959, to Mary Hendrix and the late Jimmy Hendrix in Harrisburg, PA. She was educated in the Harrisburg School District and graduated with the Class of 1977. She was employed with the Bell Telephone Company and retired from Verizon after twenty-four years of service. Jymara accepted Christ as her Savior at a young age and attended Monroe Street Church and Trinity Church of Harrisburg. Jymara was very intelligent, a jack-of-all-trades. She enjoyed working on her computer and preparing taxes. If you needed information, she was very resourceful. She also enjoyed listening to music, computer games, watching General Hospital and playing the lottery and scratch-offs. She loved to cook and passed her skills on to her grandchildren. She especially loved to spend time with her family and her special group of friends known as, The Birthday Club. On Monday, August 6, 2018, in the comfort of her home, Jymara transitioned into eternal life joining her father, Jimmy Hendrix; her maternal grandparents, Hansel and Leona Hitchcock; her husband, Bob Wallace; and her sisters-in-law, Joann, Chris, Dorothy and Bernadette. Her beautiful memory will be forever cherished in the hearts of her daughter, Tiacia of Florida; son, Dwayne (Loayma); stepdaughters, Angela, Giovanna (Don) and Shannon; her stepson, Bob Wallace Jr. (Mikki); her mother, Mary Hendrix; and her brothers, Robert Hendrix, Justin Hendrix and Edward Hendrix of Maryland (Jessica). Her life and legacy will also be honored and cherished by her grandsons, Miguel Lopez of Florida, Dwayne Jr., Sire, D`Wayatt and D`Nali; her granddaughters, D`Juanya, Bobby and Italy; her godson, Ellis Wallace; her sisters-in-law, Betty Howard (Sanford), Lois Brown (Calvin), Patricia Hills (Tyrone), all of Harrisburg, PA; her brothers-in-law, Harry Mills of Harrisburg, PA, Tommy and Walter Chapman of California. Last, but not least, her loving and devoted sister/cousin, April Lynn Davenport; as well as a host of aunts, uncles, nieces, nephews, cousins, other relatives and friends. Lovingly submitted by Jymara’s family!

The family of Mrs. Jymara Louise Hendrix Wallace created this Life Tributes page to make it easy to share your memories.