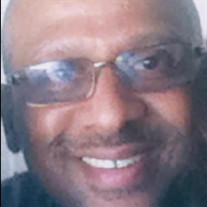 Juan D. Grigsby was born Saturday, March 29, 1953, in Harrisburg, PA, son of Edith Williams Dean and the late John T. Grigsby Jr. A graduate of the former John Harris High School, Class of 1971, he retired from the United States Air Force, Eglin Air Force Base, Florida, in 2002. Juan was a jokester who had a love for life and travel. He enjoyed Jazz, R&B music, TV, sports (a die-hard Eagles fan), and he was always meticulously organized. On Friday, August 3, 2018, at his Susquehanna Township home, Harrisburg, PA, Juan departed this life at the age of sixty-five. Along with his father, he was also preceded in death by one brother, Douglas Williams. He leaves to lovingly remember his life: his wife, Leslie Grigsby of Harrisburg, PA; his stepchildren, Shayla Penn of Crestview, FL, Jevon Penn, Shana Young, Sasha Penn, Shanelle Penn, all of Harrisburg, PA; his mother, Edith Dean of Melbourne, FL; his siblings, Jarvis Grigsby of Melbourne, FL, Janice Miller of Maryland, Jonathan Clark of Harrisburg, PA, Jarret Grigsby of California, Terrence Dean of Columbia, MD; ten step-grandchildren; uncle, Leon Williams; aunt, Elaine Barker, both of Harrisburg, PA; as well as other family members and friends who will all deeply miss Juan and are devastated by this tragedy. Submitted with our Everlasting Love, The Family of Mr. Juan D. Grigsby

The family of Mr. Juan D. Grigsby created this Life Tributes page to make it easy to share your memories.

Send flowers to the Grigsby family.