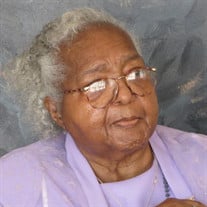 Rev. Jewell Vivian Moore Hampton was born on Tuesday, June 8, 1926, in Lovejoy, IL, to the union of Napoleon Moore and Anna Wiley Moore. After the death of her mother, she was raised by her father and stepmother, both of whom preceded her in death. Jewell was educated in the Lovejoy School System. Unable to continue her education at the time, she became a domestic to the Halyama family, but later pursued her Associate’s Degree, while in her sixties, at Belleville Area Community College (IL). She was an avid reader and loved to spend time with her family. She also enjoyed “Madea,” religious themed movies, being “out and about,” cooking and embroidery. She accepted Christ at an early age at St. Elizabeth Spiritual Temple in Lovejoy. She raised her children at the Friendship Baptist Church in Madison, IL. Jewell united again with St. Elizabeth upon her marriage to Rev. Curtis Hampton (deceased). While there, she received her call to the ministry and was licensed to preach the gospel. Upon moving to Harrisburg, PA, she became a member of the Tabernacle Baptist Church, and became a faithful member of the Sunday School. Until her illness, she was a regular attendee at most services and events. She loved God and the church. She was united in holy matrimony to the late Samuel Lawrence Jones, Sr. To this union two children were born: Marilyn L. Hughes and the late Samuel L. Jones, Jr. She later added to her family three daughters: JamesEtta (Jamie) Reed, Corliss L. Reed Dumas (deceased) and Dorothy M. Brooks (deceased). On Saturday, May 26, 2018, Jewell transitioned to eternal life, leaving to celebrate her life her two daughters, Marilyn of St. Louis, MO, Jamie of Harrisburg, PA, and her spiritual daughter, Syneth Hassel of De Soto, TX, nine grandchildren, fifteen great-grandchildren, seven great-great-grandchildren, and a host of nieces, nephews, cousins and friends. Lovingly submitted by the Family

Rev. Jewell Vivian Moore Hampton was born on Tuesday, June 8, 1926, in Lovejoy, IL, to the union of Napoleon Moore and Anna Wiley Moore. After the death of her mother, she was raised by her father and stepmother, both of whom preceded her in... View Obituary & Service Information

The family of Rev. Jewell V. Hampton created this Life Tributes page to make it easy to share your memories.

Send flowers to the Hampton family.