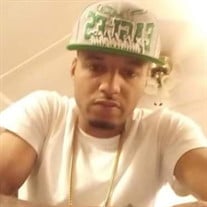 Jerron, affectionately known as “Ron-Ron” by family and friends, was born Friday, May 29, 1992, in Harrisburg, PA, son of Yolonda Y. Lewis and Brian K. Dykes. Jerron received his formal education in the Central Dauphin School District, Harrisburg, where he graduated from Central Dauphin East High School, Class of 2010. Upon his high school graduation, Jerron pursued further education attending Thaddeus Stevens College of Technology, Lancaster, PA. Jerron was known to be a sports fanatic. He played baseball, basketball and football from early childhood up until college. He was a diehard fan of the Philadelphia Eagles and the Penn State Nittany Lions, just like his Pop. But, most of all, Jerron loved his family and was a loyal friend to all. He enjoyed spending time with his family, friends and listening to music. Not forgetting, the “special times of laughter and joking” he treasured with his cousin, Crystal Cooley-Clemons. With a personality that was as big as his signature smile, Jerron’s spirit touched the hearts of many. On Wednesday, July 10, 2019, at twenty-seven years of age, Jerron transitioned from this life joining in eternal life his grandfather, Edward L. Dykes, and his aunt who was like a mother, Geneva Nichols. Jerron Edward Lewis leaves to cherish many special memories: his mother, Yolonda Y. Lewis; father, Brian K. Dykes; his siblings, Jerrell Lewis, Hailea Dykes, Joseph Payne, all of Harrisburg, PA, Genay Landrau (Pedro) of Middletown, PA, Brian Dykes of Millersburg, PA, Michael Gelsinger of Shippensburg, PA, and Joshua Troope of Aberdeen, MS; his maternal grandparents, Reverend Willie E. Lewis Sr. and Reverend Joy D. Lewis of Middletown, PA; paternal grandmother, Mrs. Linda Dykes of Harrisburg, PA; God-parents, Reverend and Mrs. William Crenshaw, Pensacola, FL; other family members and friends.

The family of Mr. Jerron Edward Lewis created this Life Tributes page to make it easy to share your memories.

Jerron, affectionately known as “Ron-Ron” by family and friends,...

Send flowers to the Lewis family.