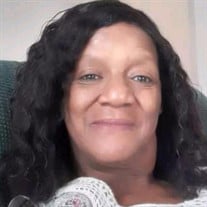 Janet Juanita (Bowman) Hamilton, daughter of the late Clifton Young and the late Delores Bowman, was born Monday, August 30, 1954, in Harrisburg, PA. Janet was educated in the Harrisburg School District and was a member of Market Square Presbyterian... View Obituary & Service Information

The family of Janet Juanita (Bowman) Hamilton created this Life Tributes page to make it easy to share your memories.

Send flowers to the Hamilton family.