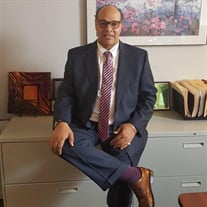 James E. Sease III, son of the late James E. Sease II and Julia Ann Weaver Sease, was born Tuesday, March 14, 1961, in York, Pennsylvania. He received his formal education in the city schools of York, PA. James began his Doctoral studies in Organizational Leadership and Development at Capella University. He was accepted at Fielding University and Walden University, and planned to transfer to Walden to finish his dissertation in the Doctorates of Education Program to receive a PhD in Human and Social Services. James holds a Master of Human Services Degree from Lincoln University where he also received an award for his project on developing training programs to educate employees in the healthcare field on providing affirmative services to Trans and Gender Variant people. Thus, he was the recipient of the Rose B. Pinkney Award for outstanding professional contribution and significant impact on behalf of professionals in the field of human services. James also holds a Bachelor of Business Administration from Temple University’s Fox School of Business where he majored in Management Information Systems. James also received an Associate of Science Degree in Computer Programming from York College of Pennsylvania. James was adjunct faculty and taught undergraduate and graduate studies in the Behavioral Health Sciences and Human Services Programs at Lincoln University. He was also adjunct faculty at Eastern University and has taught courses in their undergraduate studies program. James was a Training Manager for the Gaudenzia Training Institute, and employed with Gaudenzia, Inc., for almost 24 years where he monitored Federal & State licensing and training accreditations for Treatment and Training Programs, designed training curriculum, managed several offsite training centers in Pennsylvania, Maryland, Delaware and Washington, D.C, hired instructors and taught a number of courses in Behavioral Health and Human Services for Gaudenzia and outside agencies alike. In December 2018 James became commissioned on his 6th four year term as a notary through the Commonwealth of Pennsylvania’s Bureau of Commissions, Elections, & Legislations. James was a test administrator for a HiSET testing site in Philadelphia, overseeing the High School Equivalency testing of examinees, the inventories of test materials, and the test site. James was also an instructor for the Pennsylvania Recovery Organizations Alliance providing instruction to participants who were preparing to test to become Certified Recovery Specialists in Pennsylvania, and he was a Mental Health First Aid instructor for the National Council on Behavioral Health. Finally, James developed, written and Trained Instructors in the field on the topic of LGBTQI communities for over 15 years. James was also on a number of training committees working to develop training programs and courses in health care organizations in Pennsylvania. James was loved by everyone, especially his students. He left an everlasting impression on anyone he came in contact with. James was one of a kind and a true gem. He was a loving, caring and nurturing person who had a strong passion for helping people succeed and would embrace anyone with open arms. Some of his hobbies include fishing, shopping and dining out at restaurants across the country. In addition, James had a love for animals especially his cat Rocky. On Saturday, March 30, 2019, while at the Einstein Medical Center Montgomery, E. Norriton, PA, James exchanged a “life-well-lived” for eternal life with his parents, his wife, Lillian Mojica Sease; his brother, Jeffrey A. Sease; and his 3 pit bulls, Sandy, Rusty and Diamond. James leaves to emulate and honor his legacy his daughter, Tari D. Ebersole; stepson, Angel Mojica, both of York Pa; sisters, Janine Sease Dotts of York, Pa; Janiece Albright Porcher of Highspire, PA, Gina Waltermyer of York, and Harrice Waltermyer of Harrisburg, Pa; special aunt, Dena Sease of York, Pa; his mother-of-love, Nancy Jenkins Ryons of East Norriton, Pa; best friend, Stephanie Coates of Philadelphia, PA; his loving cat, Rocky (aka) Kitty; Also a host of nieces and nephews as well as other relatives and friends. Lovingly and Respectfully Submitted, The Family of James E. Sease III

The family of Mr. James E. Sease III created this Life Tributes page to make it easy to share your memories.