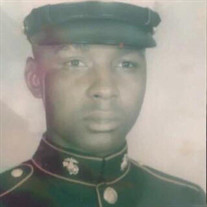 James Allen Hunter, lovingly known as “Cod” by family and friends, was born Saturday, February 9, 1952, in Johnson City, TN, son of the late Robert Eugene Alston and the late Jacquetta Hunter-Mathes. Shortly after graduating from Langston High School in Johnson City, Cod enlisted in the United States Marine Corps where he honorably served two tours of duty during the Vietnam War. He was a proud retired Marine and Vietnam War Veteran. You would never catch him driving around the city without his favorite Marine Corps baseball cap with his matching Marine Corps leather Jacket. Cod was the life-of-the-party. He brightened any room he stepped into. He had the innate ability to turn any sad occasion into a joyous one. He was a loving and devoted father; there was nothing he would not do for his family and friends. He dearly loved his children and his grandchildren. He attended all his grandson’s football games, wrestling matches, and he loved to see his granddaughter cheering on the cheerleading squad. Cod was the ultimate family man! He was everyone’s number one “go-to” for car related issues, and he was lovingly deemed as his family’s residential mechanic. A die-hard Dallas Cowboys football fan, Cod loved to exchange playful banter with his daughter and son-in-law who were die-hard Ravens fans. Cod was also a member of the Buffalo Soldiers Motorcycle Club. After thirty years of service, he retired as an airplane mechanic from Chromalloy American Corporation, Harrisburg, PA. At sixty-eight years of age, James Allen “Cod” Hunter transitioned from time to eternity on Friday, January 29, 2021, joining in eternal life his parents and one sister, Wilma Alston. He leaves a loving legacy to be cherished by his daughters, Audrey Elaine Hunter, Jacquetta Hunter-Ayewoh, both of Harrisburg, PA, and Valerie Brooks-Lewis of Oro Valley, AZ; his son, Kevin Leaks of Harrisburg; special friend, Jean Beasley of Harrisburg; siblings, Gary Mathes of Harrisburg, Penny Salters, Marcella Gillespie-Pace, Emma Lou White, Debra Mathes-Crum, Linda Mathes, Roberta Alston, Alphonso Gillespie, Robert Mathes, all of Johnson City, TN; wife, Willie Hunter of Mississippi; son-in-law, Isimhemen Ayewoh; eleven grandchildren, other family members and friends. INTERMENT WILL BE AT 9:30 A.M., WEDNESDAY, FEBRUARY 10, 2021, AT INDIANTOWN GAP NATIONAL CEMETERY. FAMILY AND FRIENDS ARE ENCOURAGED TO CLICK ON THE SHARE A MEMORY TAB TO POST VIDEOS, SHARE MEMORIES, CONDOLENCES, REFLECTIONS OR SIMPLY YOUR NAME. CLICK ON THE PHOTOS & VIDEOS ON-LINE STREAMING OF SERVICE TAB OR MEDIA TAB (MOBILE) AND TRIBUTE WEBCAST TO VIEW SERVICE.

The family of James Allen "Cod" Hunter created this Life Tributes page to make it easy to share your memories.

Send flowers to the Hunter family.