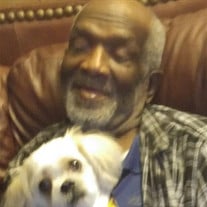 James was born near Pensacola, Florida, on Friday, December 13, 1940, to the late Mr. and Mrs. Edwards. He had two siblings, Juanita and Daniel. He recounted that he and his family to include his grandparents moved to Valdosta, Georgia. He most often reflected on the great times he had with his brother Daniel doing “boy stuff” that would land them in hot water with their grandfather. He shared that his grandfather would say, “boys let’s take a walk down by the woods.” He said it didn’t take many trips for him at his grandfather’s invitation to realize that he and Daniel would be picking switches. So one day he asked his grandfather if he could have a talk with him to make a deal. The deal was if he could make it to his grandmother first could he be safe and not have to take that walk down by the woods. They agreed. He said that he always mapped out and figured out shortcuts in the rooms where his grandmother was just in case he and Daniel did some “boy stuff” and got caught by his grandfather. He said he always kept his loving and rescuing grandmother in his view. During his adult life, when he moved to Pennsylvania after learning a few different trades of employment, he met his loving companion, Mamie L. Sims-Banks. James and Mamie spent approximately thirty-five plus years residing together with an enjoyable full-life until her passing on March 9, 2016. During this time, James worked mostly with D. J. Maintenance until his retirement. He spoke very highly of D.J., his boss and friend, sharing many stories related to their fun work days always filled with something new and the joy of meeting so many people during this time. James also shared a respectful and trusting bond with Dr. Daniel Kambic, Affilia Home Health Care and Hospice. James loved a good, long spring-summer’s day ride to visit fresh fruit and vegetable stands from here to Wilkes-Barre, Delaware and Virginia. He also enjoyed the excitement of Hollywood Casino playing the penny machine. Most treasured of all was his Shih Tzu dog Bruce, following the passing of his beloved companion Mamie. Bruce was always by his side, dedicated and faithful until James’ passing on April 30, 2018. Along with his parents and his beloved Mamie, James was preceded in death by his son, Phillip Stephen “Junie” Banks on February 21, 2014. The life of Mr. James Edwards will be lovingly remembered and honored by his children, Ronald Sims, April Sims, both of Steelton, PA, Myra Sims, Freeda Prunty, both of Harrisburg, PA, and Jacqueline Penn of Steelton; his grandchildren, Shaunte` Penn, Rob Penn, Tasha Guizzetti-Penn, Lacee Bennett, Keane Sims, Keona Sims, Richard Sims, Joyce Sims, Connelly Sims, Alfie Sims; his granddaughter-in-love, Samantha Gates; as well as a host of great-grandchildren, other relatives and friends. We spent time talking about the love and importance of Jesus Christ in our lives and accepting Him as our Lord and Savior. May our beloved father, grandfather and friend rest in the saving and comforting arms of King Jesus. Blessings! Lovingly submitted by the family of Mr. James Edwards

James was born near Pensacola, Florida, on Friday, December 13, 1940, to the late Mr. and Mrs. Edwards. He had two siblings, Juanita and Daniel. He recounted that he and his family to include his grandparents moved to Valdosta, Georgia. He most... View Obituary & Service Information

The family of Mr. James Edwards created this Life Tributes page to make it easy to share your memories.

James was born near Pensacola, Florida, on Friday, December 13,...

Send flowers to the Edwards family.