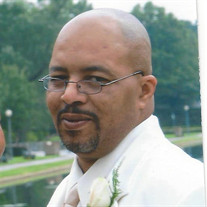 James, son of the late Josephine E. Hicks and the late Arthur Sims, was born Friday, November 11, 1960, in Harrisburg, PA. James received his formal education in the Harrisburg School District graduating from Harrisburg High, Class of 1979. Thereafter, he served his country honorably in the United States Navy. He retired from the Commonwealth of Pennsylvania as a Correctional Officer, and at the time of his passing, he was employed by Keystone Correctional Services. Among his pastimes were watching his beloved Minnesota Vikings, watching his favorite western movies including Bonanza as well as watching the evolving legal drama of Law and Order and the physically combative competition of wrestling. Foremost, and most importantly, he loved spending time with his family, especially his grandchildren. On Tuesday, February 19, 2019, at fifty-eight years of age, James transitioned from time to eternity joining his mother, father and his brother, LeRoy Hughes, in life eternal. He leaves to cherish and celebrate his life his wife of twelve years, Sherri Chatmam; his daughter, Nia Harrell; son, Quintin Harrell; granddaughter, Genesis Thomas; grandson, Grayson Thomas; and his dad, Johnnie Hicks Sr., all of Harrisburg, PA. James’ memory will also be lovingly cherished in the hearts of his siblings, Adrienne Warner (Linwood) of Harrisburg, Lorne Hicks (Sherry) of Selinsgrove, PA, Georganna Hicks of Harrisburg, Janice Hicks of Laurel, MD, Tracy Hicks, Johnnie Hicks Jr. (Michelle), Rhoda Sims, Shari Ross (Dwayne), Gene Jackson, Monica Jackson, Kerry Jackson, all of Harrisburg; along with a host of other family members and friends. Submitted in Sorrow and Love, The Family of James J. Chatman NOTE: Interment will be at 11:30 a.m., Monday, March 4, 2019, at Indiantown Gap National Cemetery.

The family of Mr. James J. Chatman created this Life Tributes page to make it easy to share your memories.

James, son of the late Josephine E. Hicks and the late Arthur...

Send flowers to the Chatman family.