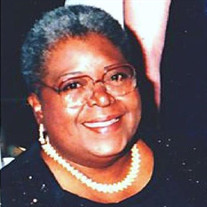 Jacqueline Vanilla Warren transitioned to her heavenly reward peacefully on October 10, 2019, surrounded by family and friends at the Harris Hospice Unit of Novant Health Presbyterian Medical Center, Charlotte, North Carolina. Jacqueline was born to Ida Mae Piper and Henry Perry Wilson in Harrisburg, Pennsylvania, on December 6, 1941. After graduating from John Harris High School in Harrisburg, she attended the Central Penn Business School and then took a job at Dover Air Force Base in Dover, Delaware. Upon returning to Harrisburg, Jacqueline took a job with FEMA, assisting in the cleanup after Hurricane Agnes. She then took a Medicare Claims Specialist position at Pennsylvania Blue Shield where she worked for twenty-three years until her retirement in 1996. Jacqueline, called “Sister” by those who knew her from her youth in South Harrisburg and “Ms. Jackie” by those who she met as an adult, loved traveling, was an avid reader, an excellent cook and part-time caterer, as well as a lover of old-western movies and TV shows. She was a member of the Macedonia Missionary Baptist Church in Harrisburg where she was a member of the Mass Choir and served as Head of the Kitchen Committee. She brought the love of the Lord with her to Charlotte to the Greater Fellowship Missionary Baptist Church where she was a member of the Hymn Choir, Pulpit Aide Committee and the Best Years Committee. Jacqueline’s passion in life was simply being a mother to her children. She loved raising her kids as well as helping any child that came into her sphere. “Ms. Jackie” demanded respect and discipline from those in her charge, but she was the personification of what a Mother’s love could and should be, and she radiated that warmth, dignity and beauty to everyone she encountered along the way. She was preceded in death by her husband, George Ronald Warren; a son, Steven Tyrone Wallace; mother, Ida Mae Piper; father, Henry Perry Wilson; sister, Margaret Josephine Noon; brothers, James Hubert Wallace, Albert Therman Wallace, Edward Duval Talifero Wallace and David Arthur Wallace. She leaves to love and cherish her memories: two sons, Kevin Eric Warren (Tonya) of Harrisburg, PA, and Jason Philip Warren (Felicia) of Charlotte, NC; siblings, Juanita Yvonne Rawlinson of Charlotte, NC, and Bishop Walter W. Piper, Jr. (Glenda) of Cincinnati, OH; two grandchildren, Joshua Pelzer and Nikia Brown; one great-grandchild, Carter Pelzer; a beloved God daughter, Jalah Smith; as well as a host of nieces, nephews, extended family members and friends.

The family of Ms. Jacqueline Vanilla Warren created this Life Tributes page to make it easy to share your memories.

Send flowers to the Warren family.