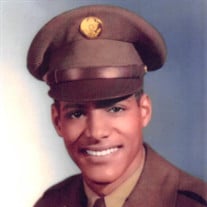 Isaac William Wright Jr. was born Tuesday, November 8, 1932, in Carlisle, Pennsylvania. He was the only son to the union of the late Mr. Isaac W. Wright Sr. and Ms. Dorothy (Patience) Wright. Isaac was known to his family and friends as “Ikey,” “Isaac,” “Isaac Jr.,” and “Mr. Washington.” Isaac and Shirley met in 1960, and they have been together ever since. Isaac was a loving father, husband and best friend to his wife, Shirley (Brown-Washington) Wright, who is a devoted mother to Charles A. Washington Jr. “BOSCO,” Tammy L. Washington, and his son, Darryl L. Washington. Isaac’s early education was in the Carlisle School District. He later moved to the Reading Area School District where he completed his education prior to enlisting in the United States Army. He was employed by the New Cumberland Army Depot retiring after twenty-six years of service. Isaac was an avid sports fan and very supportive of his children’s involvements. He enjoyed watching area sport teams from the John Harris Pioneers to the now Harrisburg High Cougars. He followed the Cougars endlessly in-state or out-of-state. His sons, Charles and Darryl, attended Harrisburg High and played for the Cougars. He also showed his support for the Grambling State University Tigers where his daughter Tammy attended. In addition, Isaac was a diehard Philadelphia Eagles fan. A lifelong and supportive Eagles follower, Isaac would watch every televised game. He collected numerous pieces of memorabilia of his Eagles. At his home where he often watched his beloved Eagles, he was surrounded by his Eagles paraphernalia such as caps, shirts, banners, seat pads, jackets, sweaters, cards and other small novelties like cups, pens, magnets and other mementos. In some of his spare time, Isaac would attend numerous activities and sporting events. He travelled in support of area teams anywhere they would go. He could often be seen at activities/high school events such as midget league football games, midget league baseball games, high school football, basketball, baseball and track and field events. He supported women sports as well. As for Tammy, her activities took him and his wife to different parts of the state. They would attend baton practices as well as competitions and dance recitals for Tammy and eventually their granddaughter. Isaac could be seen at many sporting events or activities across the city, not only for his children, but for children of his community. If he could make it, he would attend. He tried to never miss any activities or events involving his children or grandchildren. He was a supportive family member/father to all who knew him. Mr. Isaac William Wright Jr. peacefully passed away from this life on Friday, November 26, 2021. He was preceded in death by his two daughters, Karen Rowe and Theresa Wright from an earlier marriage. He leaves to honor and cherish his memory his loving wife, Shirley (Brown-Washington) Wright of Harrisburg, Pennsylvania; his children, Charles A. Washington Jr. “BOSCO” (Debbie), Tammy L. Washington-Buie (Richard) of Harrisburg, Pennsylvania, Darryl L. Washington (Christine) of Millersburg, Pennsylvania; his sisters-in-law, Ardelia Washington, Ann China, both of Harrisburg, Pennsylvania, Lola Brown of Bensalem, Pennsylvania; and his brother-in-law, Henry Brown of Mechanicsburg, Pennsylvania. His life will also be lovingly remembered and honored by his grandchildren, great-grandchildren and a host of other family members and friends. FAMILY AND FRIENDS ARE ENCOURAGED TO CLICK ON THE SHARE A MEMORY TAB TO POST VIDEOS, SHARE MEMORIES, CONDOLENCES, REFLECTIONS OR SIMPLY YOUR NAME. CLICK ON THE PHOTOS & VIDEOS ON-LINE STREAMING OF SERVICE TAB OR MEDIA TAB (MOBILE) AND TRIBUTE WEBCAST TO VIEW SERVICE.

Isaac William Wright Jr. was born Tuesday, November 8, 1932, in Carlisle, Pennsylvania. He was the only son to the union of the late Mr. Isaac W. Wright Sr. and Ms. Dorothy (Patience) Wright. Isaac was known to his family and friends as &#8220;Ikey,&#8221;... View Obituary & Service Information

The family of Isaac William Wright Jr. created this Life Tributes page to make it easy to share your memories.

Send flowers to the Wright family.