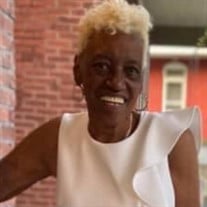 On Friday, July 4, 1947, a beautiful baby girl was born named Ingrid Louise Weedon to the late James and Edith Weedon. On Monday, May 31, 2021, Ingrid Louise Hymon transitioned to be with her Lord at seventy-three years of age. Educated in the Harrisburg Public School System, Ingrid graduated from John Harris High School, Class of 1965. After high school, she became employed with the General State Authority as a clerk and moved on to the Department of Agriculture as a Clerk Typist 3 in the Bureau of Plant Industry. She became a member of District Council 90, American Federation of State, County and Municipal Employees, President of Local 2518 and a member of The Retirees Chapter. After twenty-five years of service, Ingrid chose to take the early retirement option. Ingrid and James, known as “Cheatie” by family and friends, were joined in matrimony on September 16, 1977, enjoying a host of nieces and nephews from their blended families. Ingrid and Cheatie were blessed to share forty-seven years together. Following a few years of relaxation, Ingrid decided she wanted to rejoin the workforce and began working for the Giant Food Store in Kline Village and the Harrisburg School District as a lunch aide for Downey and Lincoln Elementary Schools. While at Lincoln, she was a Union Representative for Local 2063. After seven years of service and dedication, she finally retired and became a full time GRANDMOTHER and enjoyed vacationing with her mother and family. Ingrid was a very classy lady with impeccable style. Her wardrobe was always complimented by Michael Kors, Louis Vuitton and Christian Louboutin shoes. Ingrid’s hobbies were shopping, of course; reading James Patterson’s novels; going to the nail and hair salons; and most importantly, getting her home surrounded by planting flowers for the summer. Ingrid was also deeply involved in the community. Being a cancer survivor of twenty-five years, she participated in the American Cancer Society Walk and the Stop the Violence Walk. Whenever needed, she always made herself available. Ingrid enjoyed being a member of Martin Luther King Baptist Church where she served as President of the Women’s Ministry, temporary usher, cooking and serving food whenever the occasion arose, helping with the Youth Organization, its Friday movie day, and working with the Landscaping Committee. Besides having full time moments with her children and grandchildren, Ingrid looked forward to spending special times with her devoted husband Cheatie. One of her favorite times, every Friday, was going to breakfast at their favorite place, the Keystone at Third and Boas Streets, and then going to the Broad Street Market meeting with friends. She also looked forward to going to Ross Department Store on Tuesdays for Senior Day. Ingrid was an avid sports fan. Her favorite professional football team was the Philadelphia Eagles, “Fly Eagles Fly.” Her favorite college basketball team was the University of Kansas, “Rock Chalk Jayhawks.” Ingrid was preceded in death by her parents, James and Edith Weedon; and her brother, Thomas H. Jones Jr. She leaves to cherish her memory: her husband, James Hymon Sr.; children, Kelly Dudley (Jonathan), Nicole Brannan, James Hymon Jr. (Stacey), Andre Mosley, all of Harrisburg, PA, and Andrea Folkes (granddaughter, raised as their daughter) of Georgia; grandchildren, Shannel, Reina, Abriha, Jovan, Marcel, Bianca, Jonae and Jasmine; great-grandchildren, Ja’Rae, Ji’syn, J’vion, Shalaya, Maurice, Mehki, Lai-Yhani, Makenzi, Marcel Jr., Mariyon, Amyiha, Rakee Jr., Jaycee, Ja’Kai, Jyleer, Talia, Talil, TaeAndre and Dreunte; sister, Diane Quartlebaum (Will) of New York; brother, James T. Weedon Jr. of Virginia Beach, VA; brother-in-law, Fred R. Quartlebaum Sr. of Arizona; sisters-in-law, Carol Hewitt of Harrisburg, Denise Brown of South Carolina, Marcia Jackson of Harrisburg, Nelda Grey of Florida; uncle, Donald S. Weedon of Harrisburg; nieces, Epuda Stubbs of North Carolina, Sonya Weedon of Virginia Beach, Ja’Lia Jones of Philadelphia, PA, and Sepfia Weedon of Harrisburg; nephews, Fred R. Quartlebaum Jr. of Kansas, Jamil Jones of Georgia; and a host of extended family and friends. An amazing life, Ingrid lived to the fullest! FAMILY AND FRIENDS ARE ENCOURAGED TO CLICK ON THE SHARE A MEMORY TAB TO POST VIDEOS, SHARE MEMORIES, CONDOLENCES, REFLECTIONS OR SIMPLY YOUR NAME.

On Friday, July 4, 1947, a beautiful baby girl was born named Ingrid Louise Weedon to the late James and Edith Weedon. On Monday, May 31, 2021, Ingrid Louise Hymon transitioned to be with her Lord at seventy-three years of age. Educated in... View Obituary & Service Information

The family of Ingrid Louise Weedon Hymon created this Life Tributes page to make it easy to share your memories.

Send flowers to the Hymon family.