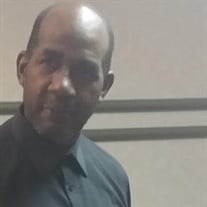 Howard A. Johnson, son of the late Howard Wright and the late Beatrice Johnson Wright, was born Wednesday, June 13, 1951, in Harrisburg, PA. Howard graduated from William Penn High School where he excelled and was the recipient of trophies... View Obituary & Service Information

The family of Mr. Howard A. Johnson created this Life Tributes page to make it easy to share your memories.

Howard A. Johnson, son of the late Howard Wright and the late...

Send flowers to the Johnson family.